Saudi Arabia Squad for 2018 FIFA World Cup in Russia: Lineup, Team Details, Road to Qualification & Players to Watch Out for in Football WC 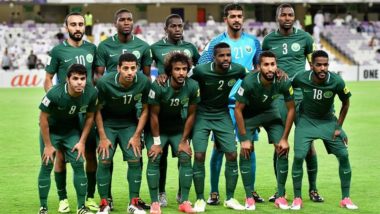 Saudi Arabia’s political clout in FIFA has seen a surge off late, but their football team still lacks the class needed to excel at an event like the 2018 FIFA World Cup. Their head coach is Juan Antonio Pizzi who has was appointed in November by the Saudi FA to bring on his wealth of experience on board. Pizzi, who had won the Copa America with Chile, has introduced a stringent training routine with the Saudi Arabia squad but problems exist with the lack of preparation time. The squad chosen though will have to play out of their skin to pack a punch in the 2018 FIFA World Cup in Russia.  We will take a look at detailed team lineup, squad news and Saudi Arabia's road to qualification. FIFA World Cup 2018 Schedule in IST for PDF Download: Fixtures, Groups, Time Table with Match Timings & Venue Details of Football WC in Russia.

The central defenders in the team will be Osama Hawsawi, and Omar Hawsawi and the pair has the trust of the coach as displayed in the recent friendlies. Mansoor Al-Harbi and Yasser Al-Shahrani will have the task to run down the flanks and provide width to the midfielder players. Yahya Al-Sehri is a household name in Saudi Arabia, and his playmaking qualities will be tested in Russia. Abdullah Otayf and Tassir Al-Jassim will be the holding midfielder players who will sit back and play the sweeper role. 2018 FIFA World Cup Friendlies Fixtures: Check Full Warm-Up Schedule Timetable in Indian Time for Germany, Brazil, Spain, England, Argentina and All 32 Countries.

Mohammed Al Sahlawi is the main forward of this Saudi Arabian team, and his ability to interchange positions with Al-Sehri makes them complement each other's game. His lack of playing time in Spain should not be a deterrent for him to start for Saudi Arabia in the World Cup.

Saudi Arabia finished second in Group B of the Asian World Cup qualifier round three to advance to the World Cup 2018. They amassed 19 points and won six out of ten matches they played. Nawaf Al Abed scored 5 goals for Saudi Arabia in the qualifiers to finish joint top of the Asian goalscoring charts.

Saudi Arabia did not qualify for the 2014 FIFA World Cup in Brazil as they finished third in Group D behind Australia and Oman in the Asian World Cup qualifiers with a dismal 6 points in 6 games they played.

Osama Hawsawi: The Saudi Arabian skipper is the most capped Saudi player, and his ageing legs have not hampered his commitment to excel for his country. A fearless warrior at the back of the Asian nation, he faces his toughest test yet against some fast-paced opposition attack in Russia.

Nawaf Al Abed: He is one of the several players operating for Al-Hilal in the Saudi Arabian league and although not always in the starting eleven, his impact both as a winger and striker is noteworthy. A flurry of goals in the qualifiers means his confidence is high and can help Saudi Arabia unlock the opposition defenses.

Saudi Arabia is placed in the same group as that of the host country, Russia in Group A. They will be playing the first match of FIFA World Cup 2018 on June 14 at Luzhniki Stadium, Moscow. But before beginning with the football's biggest event, Saudi Arabia will play few friendly matches. First one is on May 29 against Italy, then against Preu on June 3, both scheduled to be played at AFG Arena in St. Gallen, Switzerland. They will play Germany on June 8 at BayArena in Leverkusen, Germany in third and last friendly match.

(The above story first appeared on LatestLY on May 28, 2018 08:15 PM IST. For more news and updates on politics, world, sports, entertainment and lifestyle, log on to our website latestly.com).