Sunil Chhetri Shares Video of His Son Nutmegging and It Is Beautiful, Check Out Indian Football Team Captain’s Inspirational Post 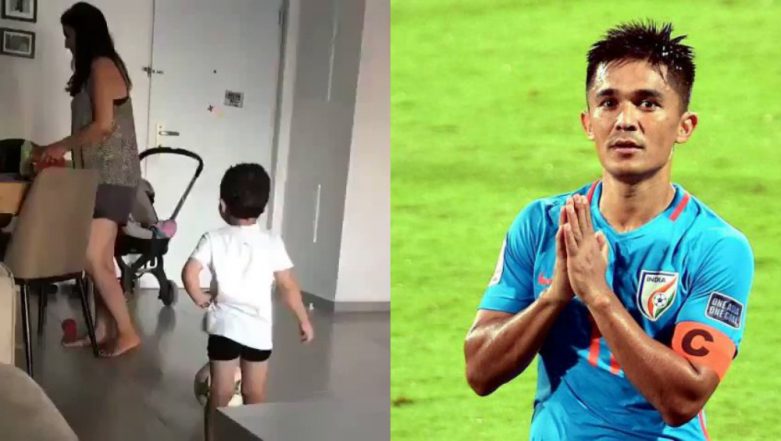 Indian football team captain Sunil Chhetri has shared a beautiful video of his son nutmegging at home. Chhetri’s son struck the ball through his mother’s (Sonam Bhattacharya) legs who was busy in her household chores. Chettri shared the video on his Twitter account. The video apparently has now gone viral with fans from all over the world reacting to it. Sunil Chhetri Lauds ISL for Helping Indian Football to Improve.

Along with the video, Chettri wrote: “I get a feeling that the one thing stopping me from trying this at any point in time is that my mother used to play the sport professionally. The consequences would have been dire!” Sunil Chhetri Becomes Second Highest International Goal-Scorer After Cristiano Ronaldo; Beats Lionel Messi.

I get a feeling that the one thing stopping me from trying this at any point in time is that my mother used to play the sport professionally. The consequences would have been dire! pic.twitter.com/pUIv9NZdRc

Chhetri was recently asked about the football talent India has, he was quoted by PTI saying, “It is better now but it is not great. Identification of talent is the first criteria of scouting and you have to identify talent at the right time.

"When a kid is 11 and when he is 14, there is a hell lot of a difference. Catching him when he is at 11 and putting him in a programme is going to be different from when he is 14. That is where we lacked. We have 1.3 billion people and it is impossible we don't have talent. We have to improve as a country (in this aspect).”

The Indian captain, who plays for Bengaluru FC in the Indian Super League, recently was named as the AIFF Men's Footballer of the Year for a record-extending sixth time. He had previously won the honour in 2007, 2011, 2013, 2014 and 2017. Chhetri is also the second-highest international goal scorers among active players with 70 strikes to his name, behind Cristiano Ronaldo (149).