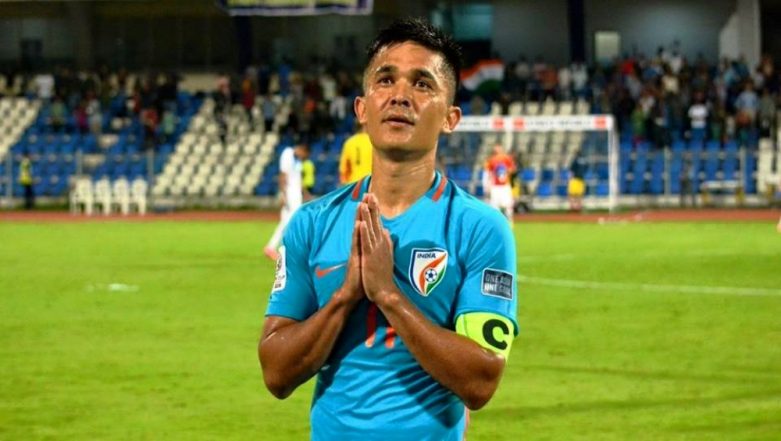 New Delhi, July 9: Talismanic Indian captain Sunil Chhetri was Tuesday named as the AIFF Men's Footballer of the Year for a record-extending sixth time. The 34-year-old striker, who has been in peak form in the last couple of years, has earlier won the honour in 2007, 2011, 2013, 2014 and 2017. He currently plays for Bengaluru FC in the Indian Super League.

Chhetri is currently the second highest international goal scorers among active players with 70 strikes to his name, behind Cristiano Ronaldo (149). He has gone past Lionel Messi (68), who is third in the list, during the 2019 Intercontinental Cup opener against Tajikistan. Sunil Chhetri Becomes Second Highest International Goal-Scorer After Cristiano Ronaldo; Beats Lionel Messi.

Chhetri is the most capped player of the country with 109 matches, ahead of former captain Bhaichung Bhutia (107). India midfielder Abdul Samad was named the AIFF Emerging Men's Player of the Year.

Best Grassroots Development Programme award will be given to Jammu and Kashmir Football Association while R Venkatesh of Tamil Nadu won the award for the best referee.