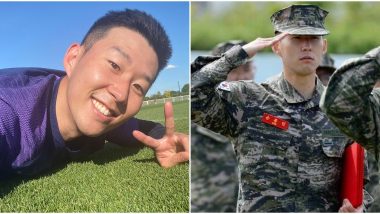 Tottenham Hotspur star Son Heung-Min returned club training on Tuesday after completing his three-month compulsory military service in his home country South Korea. The 27-year-old, who also used the time to heal from a hand injury that almost ruled him out for the season before the coronavirus pandemic happened, returned to North London and joined his teammates in the club training. With the Premier League suspended since March 23, Son travelled back to his country to undertake the compulsory military service all able-bodied South Korean men are bound to take. The official twitter account of Tottenham Hotspur shared a picture of the forward involved in the training session. Jurgen Klopp Returns to Melwood, Liverpool Shares 'New Ways of Training' (See Pics).

“Look who is back,” Spurs twitter captioned a smiling picture of the Winger in his training kits. Tottenham Hotspur reportedly trained at the Hotspur Way Training Ground on Tuesday with Son joining his teammates on return to North London. He has not played since injuring his arm in a league match against Aston Villa on February 16. Tottenham Hotspur’s Son Heung-Min Completes Three-Week Mandatory Military Service in South Korea (See Pics).

Son had returned to Seoul, South Korea’s capital last month to complete the basic training service he had to undertake as part of the country’s military code. The code states that all able-bodied South Korean men are to serve for a compulsory two years in the military but athletes who win gold medals at the Asian Games or a medal of any colour at the Olympics or any major tournament are exempted from the compulsory service.

Heung-Min Son has now completed his military training in South Korea. He is due to return to London next week. Nice one Sonny 😁👏👍⚽️#COYS #THFC #Spurs #Tottenham #Sonny #SonHeungMin #HeungMinSon pic.twitter.com/o9f5Dalz1E

Instead, they have to complete three-week basic military service and also undertake 544 hours of military service over the next 34 months from the training completion. Son was part of the South Korea team that won a gold medal in football in 2018.

Meanwhile, even as the players returned to training in small groups from Monday, Premier League’s target of resuming the 2019-20 season was jolted after six members, including players, from three clubs tested positive for the coronavirus pandemic. A total of 748 tests were conducted across the league of which tested positive.

(The above story first appeared on LatestLY on May 20, 2020 08:00 PM IST. For more news and updates on politics, world, sports, entertainment and lifestyle, log on to our website latestly.com).