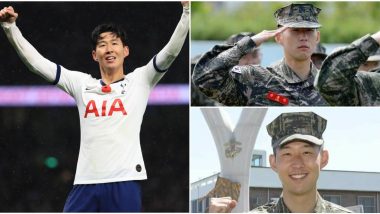 Tottenham Hotspur forward Son Heung-Min has completed a three-week basic military service training course in South Korea and also picked up the ‘Pilsung’ prize given to the best cadet among all trainees. All physically fit men in South Korea must serve a compulsory 21 months in the military according to the country’s constitution. But athletes and sportspersons, who win gold medals at the Asian Games or win any medal at the Olympics or in elite tournaments are given exemptions requiring them to only take a basic military course. Son reportedly finished the course as the best performer among 157 trainees.

According to reports, the 27-year-old was one of the only five trainees to receive the ‘Pilsung’ award at the graduation ceremony. The Spurs star, however, must undertake 544 hours of community service over the next 34 months. “He received the ‘Pilsung’ prize which is one of five types of awards for best performers,” the Indian Express reported Yonhap quoting Marine Corps officer at the unit on the southern island of Jeju as saying. “All the courses were judged in a fair and strict manner, and his military training officers have said he went through the training faithfully.”

🇰🇷 Heung-Min Son has completed his mandatory military service in South Korea. He is due to return to London next week.

Son arrived at the camp on April 20 to undergo the three-week military training camp. He also participated in a program that included harnessing the trainee’s shooting and bayonet skills, chemical, biological and radiological training, individual fighting skills and medical training. Goal.com reported that Son perhaps ‘scored a perfect 10 out of 10 in the shooting discipline.’

Heung-Min Son has now completed his military training in South Korea. He is due to return to London next week. Nice one Sonny 😁👏👍⚽️#COYS #THFC #Spurs #Tottenham #Sonny #SonHeungMin #HeungMinSon pic.twitter.com/o9f5Dalz1E

Son was among members of the South Korea national football team, who were exempted from completing a compulsory 21 months of military service after they won the gold medal in football at the 2018 Asian Games. But they were still supposed to complete a three-week basic military training course and with the Premier League suspended since March 23, 2020, due to coronavirus pandemic, Son used this time to complete his military training.

He has not played since fracturing his arm in a league game against Aston Villa on February 16 earlier this year but has not fully recovered and is available for the squad whenever the league resumes. While most major football leagues have already allowed clubs to resume training, Premier League is yet to arrive at any such decision with the number of covid-19 cases gradually rising in the UK.

(The above story first appeared on LatestLY on May 08, 2020 07:00 PM IST. For more news and updates on politics, world, sports, entertainment and lifestyle, log on to our website latestly.com).