Turkey vs Italy Euro 2020: Gianluigi Donnarumma, Burak Yilmaz And Other Key Players To Watch For

Both these sides boast of a lot of talented players and most importantly match-winners, who can turn a match around on their head, single-handedly. Let us take a look at the five players from the Turkey vs Italy match, who are to be watched out for. 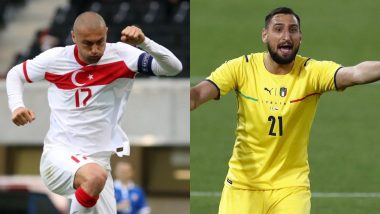 The stage is finally set for the much-anticipated Euros to kickstart. After lots of qualifiers, team selections, friendlies and a lot of other events, the Euro 2020, which was postponed from last year, is set to begin with star players from some of Europe's best sides. Some are placed in difficult groups, with Group F being the 'group of death' with Portugal, Germany, France and Hungary. Others have been placed in relatively easier situations from where they are expected to qualify. And yes, also don't forget the underdogs. Remember what Greece did in 2004? Euro 2020 Day 1 Schedule: Today's Match With Kick-Off Time in IST and Upcoming Fixtures

The first game of this year's European competition would be played between Turkey and Italy at the Stadio Olimpico in Rome. Both these sides boast of a lot of talented players and most importantly match-winners, who can turn a match around on their head, single-handedly. Let us take a look at the five players from the Turkey vs Italy match, who are to be watched out for:

1) Gianluigi Donnarumma (Italy): The tall goalkeeper would surely be a very crucial player in this game with his acrobatic saves and quick reflexes, justifying the form he has been in, which helped AC Milan finish second in Serie A this season. The Italian youngster is a free agent after his departure from AC Milan was confirmed and he would like to put up a good show, not just to help his country become one of Europe's elites but also impress other clubs who would be looking to acquire his services in the current transfer window. He has been heavily linked to a move at former Ligue 1 champions Paris Saint-Germain.

2) Burak Yilmaz (Turkey): The Turkey striker might have not been known by many just a year ago but has quickly shot to fame by inspiring his club Lille to a memorable Ligue 1 title win after more than a decade. The veteran forward netted a total of 16 goals and was undeniably one of Lille's best players leading up to their title triumph. He would surely be one of the most important players to watch out for, alongside Yusuf Yazici and Zeki Celik, who too were part of Lille's historic triumph.

3) Ciro Immobile (Italy): Talk about a deadly striker and you would instantly have names like Cristiano Ronaldo, Robert Lewandowski and Lionel Messi. But Ciro Immobile too is right up there with the very best and would be one of those players to keep an eye on, not just in this match but in the tournament at large. The Lazio striker scored a total of 25 goals for the club in all competitions and there can be absolutely no doubt as to why he wouldn't be able to replicate his form for the Azzurri.

4) Hakan Çalhanoğlu  (Turkey): The Turkish midfielder has slowly turned out to become one of AC Milan's most important players in the midfield and he played a pivotal role in their second-place finish this season in Serie A. The 27-year old scored a total of nine goals and recorded 12 assists for the Milan club across all competitions and his performance against Italy could have a hand in determining the outcome of this fixture.

5) Caglar Soyuncu  (Turkey): Caglar Soyuncu was one of the best performers for Leicester City in the Premier League this season. Rock-solid at the back, the 25-year old helped the Foxes win the FA Cup. Soyuncu is also very strong when it comes to aerial duels and set-pieces. He was part of the defensive unit that conceded the fewest amount of goals for Turkey in the qualifiers. And Turkey would sincerely hope that their young centre-back brings his best against Italy.

(The above story first appeared on LatestLY on Jun 11, 2021 08:28 PM IST. For more news and updates on politics, world, sports, entertainment and lifestyle, log on to our website latestly.com).