Euro 2020: Here’s a Look at the Dark Horses of the European Football Championships

Football, from time to time has taught us that it isn't a game that is dominated only by some teams. When we talk of favourites, it is only right if we also talk about 'dark horses' or the ones who could spring a surprise and full of upsets. 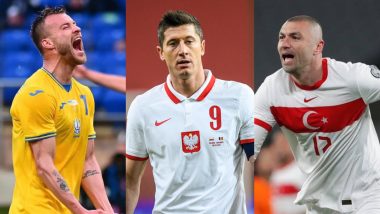 Well, who doesn't love an underdog success story? Football, from time to time has taught us that it isn't a game that is dominated only by some teams. The beauty of this game lies in its unpredictability. Fans all over cheered for Greece when they captured the European title literally out of nowhere in 2004. In recent memory, one could hardly forget how Leicester City claimed the Premier League title, outshining all other 'favourites' in the 2015-16 season. And there are many more. Euro 2020, Group E: A Look at Spain's Strength, Weakness and Chances At This Year's European Championship

When we talk of favourites, it is only right if we also talk about 'dark horses' or the ones who could spring a surprise and pull some upsets. Here is a list of the teams are the dark horses, going into this year's Euro 2020:

1) Poland: Whenever we talk about underdogs in European football, Poland automatically springs to mind. They boast of a world-class striker, who is one of Europe's elite forwards in Robert Lewandowski and we all know how lethal he can be upfront. Not just him but the Polish side also has big names like Southampton defender Jan Bednarek , Napoli mideo Piotr Zieliński and Juventus goalkeeper Wojciech Szczesny, who is solid at the back. Placed alongside Sweden, Slovakia and Spain, Poland has the muscle power to go all the way in the tournament.

2) Turkey: Turkey could also turn out to be one of the dark horses in the competition and can arguably be one of those sides which goes all the way, given the number of players they have, who have all been star performers for their clubs across the leagues of this world. AC Milan's Hakan Calhanoglu, Leicester City defender Caglar Soyuncu, Juventus' Merih Demiral and Ligue 1 winning Lille duo Yusuf Yazici and Burak Yilmaz. Remember, they had even shocked France 2-0 in the qualifiers two years ago. And there is no reason why they wouldn't be able to do the same against other teams in this years' Euros.

3) Ukraine: Not many would pit Ukraine to be a force that has to be reckoned with in the Euros this year but the fact that they were so good in the qualifiers, can give an indication of their performance in the main competition. They defeated current champions Portugal 2-1, a match which can arguably be counted as their most memorable performance in the qualifiers. To top it all off, they finished first in Group C, ahead of teams like Serbia and Portugal. Striker Andriy Yarmolenko, who plays for West Ham in the Premier League, could be a very important player for them. He is, in fact, their second-highest goalscorer for the country with 38 strikes. In defense, Mykola Matvienko is key to their chances.

4) Czech Republic: They are a team that have the third most successive appearances at the Euros after Germany and France, with 13 and eight appearances. They had secured just a point in the last Euros and perhaps many expect them to follow that same path again. But there is a reason why they have made this list. The Czechs are masters at set-pieces with stats saying that seven out of their 13 goals coming from set-pieces. In the heart of the midfield, they have a towering presence in Tomas Soucek, who won the most number of duels in the 2020-21 Premier League season.

5) Denmark: Denmark have made quite a comeback at the Euros. They failed to qualify for the last edition of this competition in France which Portugal won, but this time, they qualified for the competition coming back of an unbeaten run in the qualifying matches. The Danish also played well in the UEFA Nations League where they secured a finish above favourites England and Denmark. Their side boasts of world-class players who can help them pack a punch this year. Inter Christian Eriksen who won the Serie A this season, AC Milan's Simon Kjær, Champions League winning Chelsea defender Andreas Christensen and the rock-solid and ever-dependable Kasper Kasper Schmeichel are some of them. They are grouped with Russia, Finland and heavyweights Belgium but they would bank a lot on home advantage, especially with them to play all their matches at home in Copenhagen.

(The above story first appeared on LatestLY on Jun 08, 2021 09:53 PM IST. For more news and updates on politics, world, sports, entertainment and lifestyle, log on to our website latestly.com).