Turkey vs Wales, UEFA Euro 2020 Live Streaming Online & Match Time in IST: How to Get Live Telecast of TUR vs WAL on TV & Free Football Score Updates in India

Both these sides had dropped points in their first matches. While Wales played out a 1-1 draw against Switzerland, Turkey were demolished 0-3 in the first match of Euro 2020. 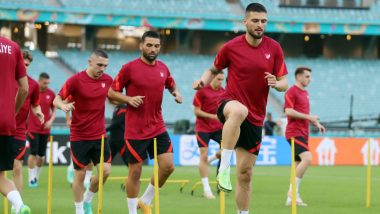 Having dropped points in their opening matches, Turkey and Wales would be determined to walk away with a win when they take on each in a Group A clash on Wednesday. The match would be played at the Baku Olympic Stadium and would begin at 9:30PM IST (Indian Standard Time). Turkey were left decimated by Italy in their first match. Not just did the visitors lose 0-3, but they failed to register a single shot on target as Roberto Mancini's men left them completely outplayed. Come Wednesday, they would expect some of their big names in Burak Yilmaz, Hakan Calhanoglu and Caglar Soyuncu to step up and perform. Euro 2020 Day 6 Schedule: Today's Match With Kick-Off Time in IST, Upcoming Fixtures and Updated Points Table

Wales on the other hand, played out a 1-1 draw against Switzerland. They had conceded a goal right after half-time but Kieffer Moore restored parity for Wales at the Baku Olympic Stadium. In terms of head-to-head comparisons, they have played six games so far out of which Wales have won three. Turkey have won two matches and one encounter ended in a draw.

When is Turkey vs Wales, UEFA EURO 2020 Match? Date, Time and Venue Details

Turkey vs Wales Euro 2020 match will be played on June 16, 2021 (Wednesday) at Baku Olympic Stadium in Azerbaijan. The match is scheduled to start at 9:30 PM IST (Indian Standard Time).

Sony Pictures Networks India is the official broadcaster of UEFA EURO 2020 in India. It will broadcast Turkey vs Wales, live match on Sony Ten 2 in English, Sony Ten 3 in Hindi, Sony Ten 4 in Tamil and Telugu, Sony Six in Bengali and Malayalam.

(The above story first appeared on LatestLY on Jun 16, 2021 06:44 PM IST. For more news and updates on politics, world, sports, entertainment and lifestyle, log on to our website latestly.com).