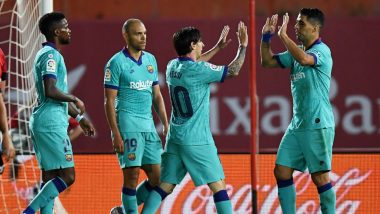 Villarreal vs Barcelona, La Liga 2019–20 Free Live Streaming Online: Barcelona are capitulating fast under the management of Quique Setien, whose Cruyff brand of football seems to be paying no dividend at the moment for the Catalan giants. Next up for them is an away tie against Villarreal where a win is a must to stay relevant in the title race. With three draws in their last four games, Barcelona needs a vastly improved performance to come anywhere close to gaining three points. Fifth-placed Villarreal have not lost since the league's resumption and are in search of Champions League qualification. Villareal versus Barcelona will be streamed on the Facebook page of La Liga from 1:30 am IST. Barcelona Announces 24-Member Squad for La Liga 2019-20 Match Against Villareal Amid Lionel Messi’s Transfer Rumours.

Ramiro Funes Mori is out for the rest of the season for Villareal and is the only player unavailable for selection for manager Javier Calleja. Raul Albiol and Pau Torres are in fine form at the moment and Barcelona will do well to find a way past the duo. Santi Cazorla will start out wide but should drift in as the game progresses. Paco Alcacer and Gerard Moreno make up for a formidable pairing in the attacking third for the hosts and it will be a surprise if either of the two is not on the scoresheet. Lionel Messi, Antoine Griezmann Involved in Training Ground Altercation After Sevilla Draw, Boss Quique Setien Forced to Intervene.

Barcelona are pondering on the future of Lionel Messi with their talismanic skipper threatening to leave the club in 2021. Antoine Griezmann could leave as well next season but is in line to start tonight. Arthur and Ivan Rakitic have the responsibility to find their quality forwards with defence-splitting passes which has been missing off late. The defence led by Gerard Pique and Clement Lenglet has looked off-colour but lack of alternatives means the duo will start again.

Where to Get Live Telecast of Villarreal vs Barcelona, La Liga 2019-20 Football Match?

Villarreal vs Barcelona, La Liga 2019-20 football match won’t be telecasted live on ant TV Channels as there are no official broadcasters for the Spanish league in India.

How to Get Free Live Streaming of Villarreal vs Barcelona, La Liga 2019-20 Football Match?

Villarreal vs Barcelona clash in La Liga 2019-20 can be streamed online of the Facebook channel of La Liga. So fans can log into La Liga FB page to catch the live action of the game. Barcelona are short on confidence at the moment and this will prove to be their undoing against a quality team like Villareal.

(The above story first appeared on LatestLY on Jul 05, 2020 01:20 PM IST. For more news and updates on politics, world, sports, entertainment and lifestyle, log on to our website latestly.com).