Chelsea would look to put behind them the disappointment of having missed out on a win at home against Manchester United in their last match and secure three points against Watford. A win would extend Chelsea's lead at the top of the points table. 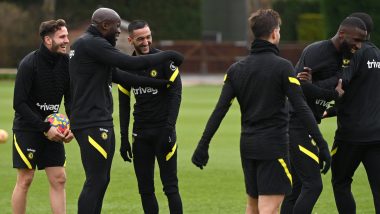 Premier League table-toppers Chelsea would take on Watford in a Premier League 2021-22 on Thursday, December 2. The match would be played at the Vicarage Road and is slated to start at 1:00 am IST (Indian Standard Time). The Blues have performed pretty well in the Premier League but a disappointing draw against Manchester United in their last match has left them just one point ahead of Pep Guardiola's Manchester City at the top of the table and they need to win this match to ensure their stay there. Watford on the other hand, are struggling at the 17th spot on the points table and although they lost their last match against Leicester City, Claudio Ranieri's side would believe that they have what it takes to upset the Blues at home. Cristiano Ronaldo Publicly Backs the Claims of Lionel Messi ‘Robbing’ Ballon d’Or 2021 From Him and Robert Lewandowski

That's what they did against Manchester United in their last home match, handing them a 4-1 loss which eventually led to the dismissal of Ole Gunnar Solskjaer as head coach. Watford can pack a punch but Chelsea, on form and on paper are outright favourites to clinch three points at Vicarage Road.

Watford vs Chelsea match in Premier League 2021-22 will be played at the Vicarage Stadium. The game will be held on December 2, 2021 (Thursday) and the match is scheduled to begin at 1:00 am IST (Indian Standard Time). Arsenal and Brazil Defender Gabriel Magalhaes Fends Off Robbers Trying To Steal His Mercedes in Horrific Attack (Watch Video)

Where to Get Live Telecast of Watford vs Chelsea, Premier League 2021-22 Football Match?

Fans in India can watch the Watford vs Chelsea match live on Star Sports channels since Star Network is the official broadcaster for the Premier League 2020-21 in India. Fans can tune into Star Sports Select SD/HD channels to live telecast the clash.

How to Get Free Live Streaming of Watford vs Chelsea, Premier League 2021-22 Football Match?

The game will also be available online for live streaming. As Star Network is the official broadcaster for Premier League in India, fans can watch the live streaming of the Watford vs Chelsea match on Disney+Hotstar.

(The above story first appeared on LatestLY on Dec 01, 2021 06:22 PM IST. For more news and updates on politics, world, sports, entertainment and lifestyle, log on to our website latestly.com).