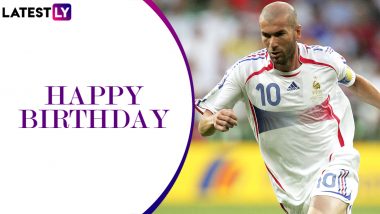 A football genius and one of the greatest players of all-time, Zinedine Zidane celebrates his 48th birthday on June 23, 2020 (Tuesday). Renowned for his elegance, vision, playmaking, ball control and technique, the current Real Madrid head coach is one of the only eight players to win the FIFA World Cup, Champions League and the Ballon d’Or trophy. Zidane is also a World Cup and Euro winner with France and was awarded the Golden Ball in both those tournaments. He has scored several spectacular goals in his 17 distinguished years in top-flight football. Zinedine Zidane Completes Huge Milestone As Real Madrid Manager, Joins Exclusive Club of Coaches With 3–1 La Liga 2019–20 Win Over Eibar.

Zidane was introduced to football at US Saint-Henri, a local football club in Castellane where he grew up with his parents and four other siblings. Zidane’s senior career, however, began at Cannes in 1986. He guided Cannes to their first-ever taste of European football in the UEFA Cup then finished runner-up with Bordeaux in the same competition before moving to Juventus in 1996. At Turin, Zidane won two Serie A titles and played in two UEFA Champions League finals but without success.

It was only after his world-record transfer to Real Madrid in 2001 for a then-record fee of 77.5 million pounds – the highest fee paid for a footballer between 2001 and 2009 – that Zidane won the UEFA Champions League title with a world-class goal in the final against Bayer Leverkusen. But then he had already lifted the 1998 World Cup and the 2000 Euro Cup with France and also clinched his Ballon d’Or trophy in 1998. As he celebrates his 48th birthday, take a look at the top five goals of Zinedine Zidane.

With the match in balance and both teams approaching half-time tied at 1-1, Zinedine Zidane produced a moment of magic leaving everyone astonished. Raul had given Real Madrid the lead after six minutes but Bayer centre-back Lucio had pulled his team back into the contest. Madrid attacked again – perhaps their last before the half-time whistle will blow – and cornered on the right, Roberto Carlos flicked a hopeful cross into the Bayer Leverkusen box. Everything was normal before the Zidane struck wonder.

Zidane, standing on his wrong side, watched and waited for the ball, adjusted his body and in a flush volleyed it home with his weaker left foot. It was a purely magical moment and 12 years later still ranks as one of the greatest Champions League goal ever scored.

Just six minutes into the game, Florent Malouda was fouled by Marco Materazzi and France had a penalty. Zinedine Zidane stepped up and converted it with sheer calmness with an audacious Panenka penalty after sending Gianluigi Buffon the wrong way. The ball hit the underside of the crossbar and dropped inside the line. It remains the fifth-fastest goal scored in a World Cup final and perhaps one of the best.

Zidane scored an incredible solo goal against Ajax to take Juventus to Champions League final. Zidane raced into the Ajax box with Juventus already leading three 3-1, received a pass and beat two defenders with a half Cruyff turn before rounding off the goalkeeper to net a brilliant solo goal.

Manchester United and Juventus were pitted in the same group and faced off at Old Trafford in their first meeting. United led 3-1 and were winning and although Zinedine Zidane couldn’t overturn the result, he left his mark in the clash. Zidane scored with a wonderful free-kick in the final minute of play. Seconds from the final whistle, Juventus won a free-kick outside the United box and Zizzou stepped up. He curled the ball over the wall and into the far right corner leaving United goalkeeper Peter Schmeichel will little chance.

A goal similar to the one he scored against Bayer Leverkusen in the 2002 Champions League final. Only this time Zidane was outside the penalty box and was shooting with his favoured right foot. Ronaldo crossed the ball from the far right edge to Zidane, who was at the centre just outside the penalty box. He watched and waited before connecting a powerful right-footed volley into the left corner.

After his retirement from football in 2006, Zidane returned to Madrid in 2010 as a special advisor to coach Jose Mourinho. A year later, he became Real Madrid's sporting director before being appointed as an assistant coach to Carlo Ancelotti. in 2014, Zidane took over the Real Madrid Castilla team (B team) as their head coach before being promoted as the head coach of the senior team in 2016.

(The above story first appeared on LatestLY on Jun 23, 2020 08:00 AM IST. For more news and updates on politics, world, sports, entertainment and lifestyle, log on to our website latestly.com).