The Indians earned 11 penalty corners but could score off only two. Reid said poor penalty corner conversion, despite the presence of Harmanpreet Singh, who has been rated the Player of the Year twice, was a major letdown for India. 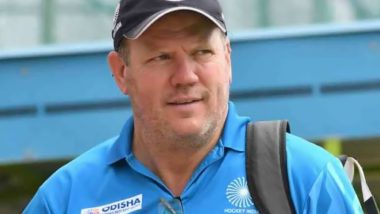 Bhubaneswar: Graham Reid, chief coach of the Indian men's hockey team, on Sunday picked poor penalty corner conversion, failed to capitalise on circle penetrations, allowing easy turnovers and failure to make the most of their opportunities as the reasons for his team allowing New Zealand to make a comeback and hold them 3-3 and overcome the hosts in sudden death shoot-out in the FIH Odisha Hockey Men's World Cup 2023 Crossover match, here. India led 2-0 towards the end of the first half and then 3-1 in the third quarter but made basic errors and allowed the Black Sticks to fight back and level scores 3-3 and take the matter into a shoot-out. The Indians earned 11 penalty corners but could score off only two. They had 18 circle entries but could manage only 12 shots at the goal. India Out of Hockey World Cup 2023, Following Defeat to New Zealand on Penalties in Crossover Match.

"Our corner conversion (was the major reason), but I will also say we had a lot of circle penetrations but we couldn't convert those chances. We scored three goals today and 3-4 or goals usually should be enough. In defence we needed to be tidier," Reid said in the post-match press conference after his team lost 3-3 (4-5) to New Zealand. Reid said poor penalty corner conversion, despite the presence of Harmanpreet Singh, who has been rated the Player of the Year twice, was a major letdown for India.

"It is a factor but not the only factor, we still created enough chances tonight to win The problem tonight was that every time we won the ball, we gave it back to them, No, not every time but certainly too many times and you know that is the telling factor for the second or was it the third goal. We turned over the ball but gave it back straight away and lost the opportunity. At this level, you can't do that," said Reid. It was also surprising that the Indians did so poorly in this aspect of the game as the short-corner experts had attended a special camp for drag-flickers by Dutch expert Bram Lomans just before the World Cup. Skipper Harmanpreet Singh said it was not the case of too many coaches spoiling the broth. ‘First Cricket, Now Hockey’ Fans React As New Zealand Knock India Out of Hockey World Cup 2023.

Coach Reid said the team did not succumb to too much pressure of the high expectations as they went into the World Cup with high hopes of ending a 47-year drought for medals after doing the same at the Tokyo Olympics in 2021. "Look, pressure and expectations will always be there, We made some mistakes which we normally don't do. so those are the sort of things that we need to analyse and talk about and come up with a solution for our next game," he said. "Tonight, it was about consistency and in the last quarter we let ourselves down as we threw the ball down and allowed them to come back. There is a period when every time faces this issue of converting circle penetration). We probably have to go back to the drawing board and work out the solutions," he added.

(The above story first appeared on LatestLY on Jan 23, 2023 07:28 PM IST. For more news and updates on politics, world, sports, entertainment and lifestyle, log on to our website latestly.com).