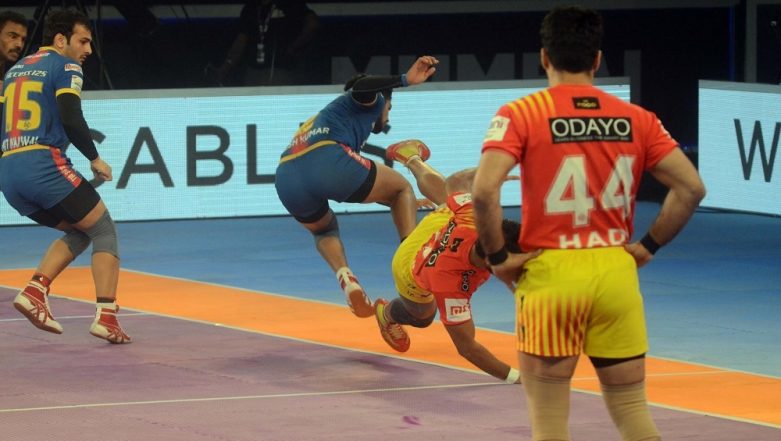 Mumbai: Players in action during a Pro Kabaddi League 2018 match between UP Yoddha and Gujarat Fortunegiants. (Photo: IANS)

Mumbai, January 4: Gujarat Fortunegiants will look to tighten all screws in their second successive attempt at glory when they face a resurgent Bengaluru Bulls in the summit clash of the Pro Kabaddi League (PKL) Season 6 at the NSCI Stadium here on Saturday. The PKL-6 final will interestingly be a battle between two sides both of which have tasted pressure but failed to own the crown in previous editions. While Gujarat finished runners-up in their debut season after losing to 2017 title holders Patna Pirates, Bengaluru had the opportunity of winning their maiden title in the 2015 season before they lost out to U Mumba.

Going into the crucial summit clash, Gujarat will again bank on their star raider pair of K. Prapanjan and Sachin while captain Sunil Kumar and the likes of Sachin Vittala and Vikram Kandola will be in defence. The performance of the all-round pair of Hadi Oshtorak and Rohit Gulia has been impressive and will look to continue that momentum. Pro Kabaddi League Season 6 2018 - Teams.

After the 38-31 win against UP Yoddhas in the second qualifier, Gujarat coach Manpreet Singh rightfully pointed out on the need to work on their defence in the later part of their matches. Gujarat's defence was exposed from the fact that the Yoddhas managed to give a late scare by pocketing as many as 17 points, including an All Out in the second half. Pro Kabaddi League 2018–19 Schedule Free PDF Download Online: Full Timetable With Match Dates & Timings, Venue Details of VIVO PKL Season 6.

"UP is a great team, we had no doubt they would come hard at us in the second half. We also made a few mistakes and need to correct those if we want to lift the title on Saturday," Singh told IANS on Thursday. On the other hand, fresh from the massive 41-29 win over Gujarat in the first qualifier, Bengaluru will be hoping for a repeat in the final.

Bengaluru's fortunes will once again bank on the performance of the likes of Pawan Sehrawat and skipper Rohit Kumar, who were the top scorers with 13 and 11 points respectively in their previous match. While Rohit will spearhead the raiding department that also comprises the likes of Pawana and Kashiling Adake, the defence line will have the brilliance of Mahender Singh, Amit Sheoran, Ashish Kumar and Sandeep.

All-rounders Jasmer Gulia and Mahesh Magdum will also need to contribute to the cause if they dream of lifting the title. Commenting on the big final, Bengaluru coach B.C. Ramesh said it will be a game of equals and the side which can hold its nerves on the day will be the eventual winners.

"Gujarat has a strong defence and an equally good raiding department. We drew with them in the first match this season before winning the second game. So the focus will be on keeping the unbeaten record intact in the final," he said.