Katie Ledecky, US Olympic Champion, Stuns Netizens by Swimming With a Glass of Milk Balanced on Her Head (Watch Viral Video) 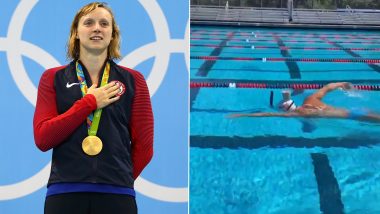 Five-time Olympic swimming champion, Katie Ledecky has won the internet with her latest swimming challenge. The US Olympian swam an entire length of a pool while balancing a glass of milk on her head. Her act has left the internet buzzing with astonishment and praise for her out worldly effort. Quite amazingly, Ledecky, who with 15 World Championships gold medal is the most successful woman swimmer in the competition, did not even spill a single drop of the chocolate milk while swimming through the pool.  Florida Man Successfully Purchases Porsche with a Fake Banknote Printed from His Home Computer BUT Gets Caught While Buying Three Rolex Watches in the Same Way.

The unique stunt was Ledecky’s part to show her support for the ‘#GotMilkchallenge’ promotional campaign for the Dairy industry in the United States. The campaign was started by the Milk Processor Education Program, a dairy industry-funded group. Many have taken up the challenge but none came close to the one pulled off by Ledecky.  ‘Disappointed Pakistani Fan Meme’ Guy Sarim, Famous From 2019 CWC, Shares Message for Pakistan Cricket Team Ahead of England Test Series, Gets Trolled Again (Watch Video).

Katie Ledecky Pulls off the Impossible!!

Possibly one of the best swims of my career! Check out the full swim here. What can you do without spilling a drop?! #gotmilk #ad Check out the #gotmilkchallenge on Tik Tok! [Link in bio]

In the video, the swimming champion is seen pouring chocolate milk from a jar by the side pool and then she balances in on her head before swimming the length of the pool with the glass perfectly placed on her head. She then emerges from the pool and takes a sip from the glass. “Possibly one of the best swims of my career!,” she wrote on Instagram while sharing the clip.

Social media was amazed by her control and strength in pulling off such a difficult challenge and many commented that Ledecky had just defied the laws of physics. Many also joked that they can’t walk holding a glass of milk without spilling some. Take a look at some reactions.

What an absolutely unbelievable flex. Just imagine how many horrific attempts to try this will be out there soon. Godspeed. https://t.co/MjWJWkx3ao

Others Can't Even Walk Without Spilling

I can’t even walk without spilling it. https://t.co/6uPIra1QOC

this is legit wild https://t.co/KCDmbu2rxL

What Sorcery is This?

That is an UNREAL level of athletic talent/skill. https://t.co/te4rM0elxQ

The campaign started on Monday and according to Yin Woon Rani, the chief executive of the Milk Processor Education Program, this new challenge is for the social media generation. The campaign was initiated to revive the ‘Got Milk’ a slogan of the 1990s, which in the past made TV advertisements featuring celebrities like Britney Spears and Dennis Rodman. This time, however, it has been started for TikTok and social media first-generation users.

(The above story first appeared on LatestLY on Aug 05, 2020 12:20 AM IST. For more news and updates on politics, world, sports, entertainment and lifestyle, log on to our website latestly.com).