List of Sports Personalities Who Have Contributed Towards Coronavirus Relief Fund: Messi, Cristiano Ronaldo, Federer, Ganguly and Others Come Forward in Fight Against COVID-19

But amidst the global devastation, frightening number of deaths and crisis, coronavirus has also united the world in coming together and fighting as one against the pandemic. Many have come forward to support their governments in fighting and tackling the COVID-19 epidemic and among them are several Sporting associations and sports personalities. 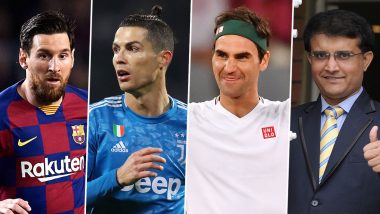 The outbreak of coronavirus pandemic has brought the world to a still with roads deserted, cities abandoned and events cancelled. With over 21, 000 deaths and close to five lakh people diagnosed with the pandemic, COVID-19 has drawn analogies with World War I & II. Such has been its devastation that most countries, including India, have declared complete lockdown to somehow curb and contain the spread of coronavirus. The sporting world haven't been spared either with events across the globe either suspended until further notice or called-off for the year. From the 2020 Tokyo Olympics to Premier League and even the America Basketball NBA, almost all sporting events have been postponed. Coronavirus Outbreak: From Arsenal Manager Mikel Arteta to NBA Player Rudy Gobert, Here's A List of Sports Personalities Who've Tested Positive for COVID-19.

But amidst the global devastation, frightening pace of deaths and crisis, coronavirus has also united the world in coming together and fighting as one against the pandemic. Many have come forward to support their governments in fighting and tackling the COVID-19 epidemic and among them are several Sporting associations and sports personalities, who have donated and made huge contributions in helping their counties battle the pandemic and save humanity. From Cristiano Ronaldo funding intensive care units (ICU) for several hospitals in Portugal to Lionel Messi and Roger Federer donating 1 million each, let's take a look at all the sporting personalities, who have contributed in battling the coronavirus. Coronavirus Scare: List of Sporting Events Suspended or Cancelled Due to COVID-19.

1 Gary Neville – Long before any sports star had even thought of making a contribution, former Manchester United and England right-back Gary Neville decided to accommodate and shelter all NHS (National Health Service) staff for free in the two hotels he co-owns with Ryan Giggs.

6 Lionel Messi – The Argentina and Barcelona superstar donated 1 million euros to the Hospital Clinic, a public hospital in Barcelona. The six-time Ballon d’Or winner was also reported to have donated an undisclosed sum to hospitals in Argentina

9 Shahid Afridi - The former Pakistan captain and his foundation have been giving free ration, masks, disinfectant soaps and sheets to many poor people in Pakistan.

14 PV Sindhu – Badminton World Champions and India’s highest-ranked shuttler, PV Sindhu, has donated Rs 5 Lakh each to the Telangana and Andhra Pradesh Chief Minister’s Fund in their fight against COVI-19

16 Hima Das - India's first World Championships gold medallist in athletics and one of the country's biggest medal hopes, Hima Das pledged that she will donate a one month's salary to Assam's COVI-19 relief fund

18 Gautam Gambhir - World Cup winner and cricketer-turned-politician, Gautam Gambhir, donated Rs 50 Lakh to the Delhi Chief Minister's relief funs and pledged for more to ensure citizens of the state are given adequate equipment to fight the pandemic

20 Rafael Nadal - Spanish tennis superstar and 19-time Grand Slam champion, Rafael Nadal has donated an undisclosed sum and also urged other athletes from Spain to come forward and support the fight against the Pandemic.

While all these players and sporting superstars have contributed in huge numbers to support the world in its fight against the deadly virus, many clubs and sporting associations have also come forward to lend their support in the battle against COVID-19.

The German national team football players also donated 2.5 million in German currency to the country’s government to provide more medical support. Centrally contracted Pakistan cricketers donated Rs 5 million to the national emergency fund, while Bangladesh cricketers also pledged to donate half their monthly salaries to their government to support the fight against coronavirus.

(The above story first appeared on LatestLY on Mar 26, 2020 02:23 PM IST. For more news and updates on politics, world, sports, entertainment and lifestyle, log on to our website latestly.com).