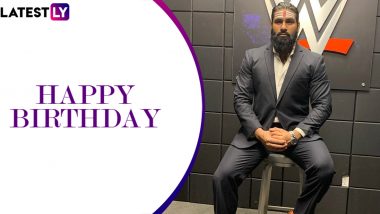 Rinku Singh turns 32 years old on August 8, 2020. The Indian wrestler has made his country proud by doing well in baseball and making it to WWE, which is the largest entertaining wrestling company in this world. Rinku was the first Indian to represent India in baseball sports. He is currently signed to the NXT brand of WWE. Walt Disney's movie Million Dollar Arm directed by Craig Gillespie was based on the true story of the baseball pitcher Rinku Singh. On the occasion of his birthday, let us take a look at the five lesser-known facts about this Indian wrestler.

Rinku Singh grew up in a rural village in Bhadohi, Uttar Pradesh. His father was a truck driver and the wrestler faced lots of hardship during his childhood days. Rinku was one of nine siblings who all lived in the family's one-room house. His childhood home had electricity but relied on well water. As a little boy, Rinku's favourite sports were cricket and javelin throw.

1. Rinku Singh was signed by the Pittsburgh Pirates (American Professional Baseball Team) after he won a pitching contest on a 2008 reality television show The Million Dollar Arm.

2. Rinku Singh wasn't aware of the baseball sports before winning The Million Dollar Arm contest which was created by an American sports agent J. B. Bernstein.

3. During his childhood days, Rinku Singh was a junior national javelin medalist.

4. In 2012, Rinku Singh pitched in a career-high 39 games for the West Virginia Power, throwing 72 innings, earning a 3–1 win-loss record and striking out 65 batters.

(The above story first appeared on LatestLY on Aug 08, 2020 09:15 AM IST. For more news and updates on politics, world, sports, entertainment and lifestyle, log on to our website latestly.com).