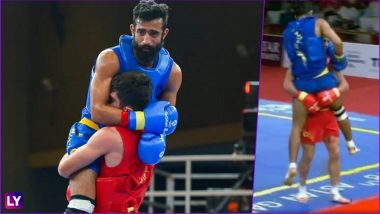 At times, when competitors compete in any sport, more often than not the sportsmanship takes a back seat. They say, winning the competition is what it is all about. However, it is not the truth always. On Day 4 of the Asian Games 2018, it wasn’t all about winning for Iran’s Wushu competitor Erfan Ahangaraian.

The match was over. The referee had announced the result, and it was Iran’s Erfan who was declared as the winner. India’s Surya Bhanu Pratap Singh was seen limping after the match, probably because of the injury he sustained on his knee during the match.

After their semifinal showdown, which the Iranian Erfan won 2-0, he carried his Indian counterpart on his shoulders and helped him reach the Indian quarters. It was quite a spectacle!

Here’s what happened at Asian Games 2018:

The most beautiful moment of the #AsianGames2018

The following incident occurred after Men’s Sanda 60kg semi-finals match at Asian Games 2018. It happens to be one of the most heartening moments in sports’ history. Not only did the Iranian athlete won his semi-final bout against India’s Surya Bhanu Pratap Singh, but he also ensured that he left the arena by winning hearts.

As for India, the Wushu wrestlers won four Bronze medals across different categories. It was their best performance in Wushu. With that India’s medal tally moved up to 15 medals. Currently, India has won 17 medals at Jakarta Palembang 2018, of which there are 4 Gold, 4 Silver, and 9 Bronze medals. Stay tuned with us for all the latest news updates about 2018 Asian Games here!

(The above story first appeared on LatestLY on Aug 23, 2018 03:07 PM IST. For more news and updates on politics, world, sports, entertainment and lifestyle, log on to our website latestly.com).