PV Sindhu would have another shot at a podium finish when she takes on China's He Bingjiao in the bronze medal match while the Indian men's hockey team and boxer Satish Kumar would be seen in action, amongst others. 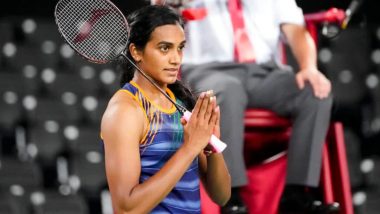 India had a mixed day at the Tokyo Olympics 2020, on Saturday, July 31. The day began with Kamalpreet Kaur securing a final berth in the discus throw event.  The Indian women's team defeated South Africa and they eventually made it to the quarterfinals after Ireland suffered a 0-2 loss to Great Britain. But millions of Indians all across the world suffered heartbreaks when PV Sindhu, who had been in such good form in the Tokyo Olympics so far, suffered a loss to Tai Tzu Ying in the semi-finals of women's singles badminton. Boxer Pooja Rani too lost her quarter-final round against China's Li Qian, much to the disappointment of the Indians. Not to forget Atanu Das, whose brave show at the Tokyo Olympics also came to an end. Team India at Tokyo Olympics 2020 Recap of July 31: Check Out India’s Medal Tally and All Event Results

However, India would have a day to look forward to on Sunday. Sindhu, who had still is in contention for a podium finish, would face China's He Bingjiao in the bronze medal match. The country would cheer for golfers Anirban Lahiri and Udayan Mane along with Fouaad Mirza, who would be competing in the Cross country-Individual event in equestrian sports. The men's hockey team would take on Great Britain in the quarterfinals and also, boxer Satish Kumar, who is just one way of winning a medal, would participate in the Men’s (+91 kg) Quarterfinal event.

Sony Network holds the official rights for the Tokyo Olympics 2020. The matches will be broadcast on Sony TEN 1 HD/SD, Sony TEN 2 HD/SD  and even Sony SIX SD/HD will live broadcast with English commentary while Hindi commentary will be available on Sony TEN 3 HD/SD. SonyLiv will be the app that will bring you the live streaming of the games.

(The above story first appeared on LatestLY on Jul 31, 2021 10:19 PM IST. For more news and updates on politics, world, sports, entertainment and lifestyle, log on to our website latestly.com).