Pakistan pacer Hasan Ali, who was ruled out of the PSL 2020 playoffs due to an injury, took to Twitter to wish Mirza on her birthday. “Happy birthday @MirzaSania bhabi,” Hasan Ali captioned a picture. In the photo, Sania Mirza, Shoaib Malik, Hasan Ali, his wife and Faf du Plessis were present. All three players are part of Peshawar Zalmi team. 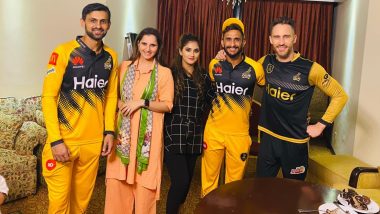 India tennis superstar Sania Mirza celebrates her 34th birthday on November 15, 2020 (Sunday). Wishes poured in from around the world with her fans, colleagues and fellow members of the sports fraternity wishing the six-time Grand Slam champion as she celebrates her special day. Suresh Raina, Yuvraj Singh and Pakistan cricketer Hasan Ali led the wishes from the sports fraternity for Mirza on her birthday. Sania, who last appeared at the 2020 Australian Open, is expected to return back into action next year. Sania Mirza Spotted in Karachi Cheering for Husband Shoaib Malik During Peshawar Zalmi's Match Against Lahore Qalandars in PSL 2020 (View Pics).

Pakistan pacer Hasan Ali, who was ruled out of the PSL 2020 playoffs due to an injury, took to Twitter to wish Mirza on her birthday. “Happy birthday @MirzaSania bhabi,” Hasan Ali captioned a picture. In the photo, Sania Mirza, Shoaib Malik, Hasan Ali and his wife as well as Faf du Plessis were present. All three players are part of the Peshawar Zalmi side which lost to Lahore Qalandars by five wickets in eliminator 1 of PSL 2020. Sania Mirza Birthday Special: Fiercely Feminine, Incredibly Chic, an Ode to Her Sartorial Sass!

Suresh Raina also posted a picture of Sania Mirza with their respective family members and wrote: “Happy birthday @MirzaSania. Sending you lots of love & happiness from us. Best wishes always.” Raina was also joined by fellow Indian cricketers Yuvraj Singh and Harbhajan Singh who also took to social media to wish the tennis superstar. Take a look at their tweets and the wishes of others from the sports fraternity.

Happy birthday mirchie mommy 🌶 @MirzaSania! Hope you have an “ace” of a year ahead! Loads of love always pic.twitter.com/wPJVE1nqzs

Happy birthday @MirzaSania ... an inspiration, a fighter and the most fun storyteller.

Happy birthday to a terrific tennis player from a family of cricketers. @MirzaSania won 6 Grand Slam titles and had one of the finest forehands in women's tennis. Also, a huge inspiration for Indian sportswomen, winning multiple medals at the Asian and Commonwealth Games! pic.twitter.com/JLqeCN1UO7

Sania, born on this day in 1985, is one of India’s most successful tennis players with six Grand Slam titles to her name. She was the first Indian to win a WTA title and also the first Indian to win a women’s doubles Grand Slam title. She achieved the feat partnering Martina Hingis at the 2015 Wimbledon Championships. To date, Sania has won three Grand Slams titles each in women’s doubles and mixed doubles categories.

(The above story first appeared on LatestLY on Nov 15, 2020 06:18 PM IST. For more news and updates on politics, world, sports, entertainment and lifestyle, log on to our website latestly.com).