Indian boxer Nitu put up a dazzling show on her debut at the 12th edition of the IBA Women's World Boxing Championships and entered the 48kg second round after outpunching Romania's Steluta Duta 5-0 in Istanbul on Tuesday. 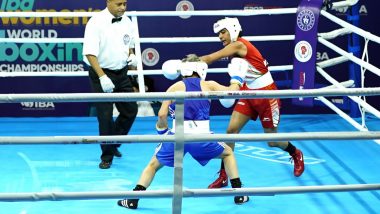 New Delhi, May 10: Indian boxer Nitu put up a dazzling show on her debut at the 12th edition of the IBA Women's World Boxing Championships and entered the 48kg second round after outpunching Romania's Steluta Duta 5-0 in Istanbul on Tuesday. An exciting bout that saw both the boxers starting dominantly from the word go as they exchanged continuous punches in an intense fast-paced opening round. However, the 21-year-old from Bhiwani, Nitu, who won the gold medal at the 2022 Strandja Boxing Tournament earlier in February, did manage to make an impression as the bout progressed. The last three minutes were also pretty close and saw fierce battle between the two, but this time the Indian stepped up brilliantly and looked in good control, moving around the ring effortlessly. Women’s World Boxing Championship: Lovlina Borgohain Off to Flying Start in Istanbul.

The 2017 Youth World Champion Nitu will now face Spain's Lopez Del Arbol Marta in the Last-16 match on Saturday. Lopez defeated Vietnam's Nguyen Thi Thu Nhi by unanimous decision in the opening round match. On Wednesday, four Indians will be seen in action. 2019 Asian Championships bronze medallist Nikhat Zareen will kickstart her campaign against Mexico's Herrera Alvarez in the 52kg opening round match. Manisha (57kg), Parveen (63kg) and Saweety (75kg) are the country's three other pugilists who will also begin their challenge in the round-of-32 on the third day of the prestigious event, which has been witnessing a record participation of 310 boxers from 73 countries across the world. Manisha, who received a bye in the opening round, will square off against Nepal's Kala Thapa while Parveen and Saweety will take on Ukraine's Mariia Bova and England's Kerry Davis respectively.

(The above story first appeared on LatestLY on May 11, 2022 11:01 AM IST. For more news and updates on politics, world, sports, entertainment and lifestyle, log on to our website latestly.com).