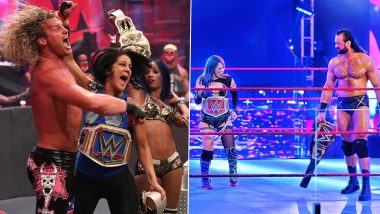 WWE Raw June 29, 2020, kicked off with a brawl between Sasha Banks and Asuka, it was then interrupted by Dolph Ziggler, who introduced Drew McIntyre to the ring. This was then followed by contract signing between Sasha Banks and Asuka for Raw Women's Championship and Drew McIntyre and Dolph Ziggler for WWE Championship. Both Asuka and McIntyre will defend their title at WWE Extreme Rules which will take place on July 19, 2020. WWE Raw June 22, 2020 Results and Highlights: Dolph Ziggler Challenges Drew McIntyre For Title Match; Big Show Confronts Randy Orton & Ric Flair (View Pics)

Post contract signing, there was chaos again in the ring, which then lead to a mixed tag team match between Drew McIntyre, Asuka and Sasha Banks, Dolph Ziggler. The heel challengers ended the show on a high note, as they defeated both champions in the Tag Match, with little assistance from Bayley. Apart from this, we also saw Ric Flair delivers Randy Orton message, where the Nature Boy said that The Viper will face Big Show as per his convenience. WWE Superstar Roman Reigns Hints About His Return, The Big Dog Willing to Fight in Empty Arena.

Seth Rollins yet again this week on Raw said that Rey Mysterio should sacrifice himself for the betterment of Raw. His promo was cut by Rey Mysterio and Dominik Mysterio through video conference. Rey Mysterio reminded Rollins that his son once said, 'An eye for an eye'. After this Seth Rollins, Buddy Murphy faced Humberto Carrillo, Aleister Black, in which they emerged out victorious. Now let us take a look below a few pictures and other results from this week's Raw. The Undertaker Recalls Match With Goldberg That Almost Killed Him, Watch Video of The Retired WWE Star Reveal How He Survived by ‘Two Inches’

R Truth wins back his 24x7 title again by defeating Akira Tozawa. Bobby Lashley defeated Ricochet in one on one match. This was all from this week's Raw, we can expect more exciting action in the coming weeks. Stay tuned with LatestLY for more updates and news from WWE.

(The above story first appeared on LatestLY on Jun 30, 2020 10:17 AM IST. For more news and updates on politics, world, sports, entertainment and lifestyle, log on to our website latestly.com).