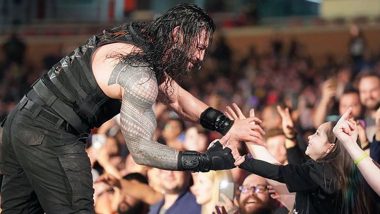 Roman Reigns is out of in-ring action ever since the coronavirus pandemic situation has broken out. The Big Dog recently revealed in a recent interview that he is willing to fight in an empty arena. With this, he even hinted about his return to WWE and take a shot at Universal Championship. Roman Reigns said that it is not coronavirus that has kept him away from WWE, it is his responsibility as a father that has forced him to stay at home. Roman Reigns Cried After His Match Against The Undertaker at WrestleMania 33, The Big Dog Reveals in an Interview!

Roman Reigns has a daughter and twin boys with wife Galina Joelle Becker. In April, 2020, chatting to Muscle & Fitness, said that his wife is yet again pregnant with twins. The Big Dog got blessed with twins last month in May, 2020 and he is quite busy with fatherhood duty. In an interview with the MetroPlus, Roman Reigns said that at this time around he wants to stay with his family and take good care of them. The Big Dog also took the stand of WWE, by saying that the wrestling company takes good care of their employees and take all necessary steps to prevent the spread of COVID-19 germs. He also lashes out wrestlers who are staying home due to coronavirus situation. The Undertaker Regrets His Decision of Choosing Brock Lesnar Over Roman Reigns After Former Broke His WrestleMania Winning Streak.

When The Big Dog was asked about his return to WWE in that interview, he said that he has been training very vigorously to maintain his fitness level. The Big Dog further said that he is ready to fight and even if he has to wrestle without crowd applause and cheering, he would do so. In order to keep the spirit of WWE alive, Roman Reigns is even ready to wrestle in an empty arena and compete at the highest level, probably for Universal Championship.

(The above story first appeared on LatestLY on Jun 29, 2020 05:03 PM IST. For more news and updates on politics, world, sports, entertainment and lifestyle, log on to our website latestly.com).