The Undertaker Recalls Match With Goldberg That Almost Killed Him, Watch Video of The Retired WWE Star Reveal How He Survived by ‘Two Inches’ 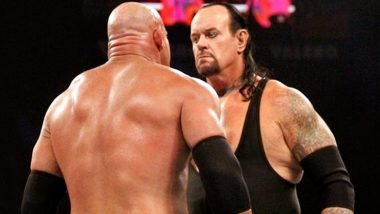 The Undertaker made some shocking revelation in the last episode of 'The Last Ride' which aired on WWE Network on Sunday, June 21, 2020. Apart from speaking about his retirement, The Deadman said that he survived by just two inches from breaking his neck during his match against Goldberg at WWE Super ShowDown 2019. The main event match was promoted in the headline of that event which took place at Jeddah in Saudi Arabia. The Undertaker Announces Retirement: Relive The Deadman's Best Matches and Grand Entrances in WWE (Watch Videos)

The Undertaker was about to break his neck in that match, when Goldberg failed to execute a proper jackhammer. This resulted in The Undertaker landing on his head instead of his back. The officials and fans around the ring were shocked after this and almost got goosebumps. Had The Undertaker landed on his neck, it could have led to a fatal injury or even death. The Undertaker said on The Last Ride that, 'Well, I was two inches away from making my wife a widow and my kids fatherless'. It must also be noted that WWE was criticised for booking The Undertaker vs Goldberg for the main event at Super ShowDown 2019. Both wrestlers looked tired in the end, The Deadman won this match by giving a half-hearted chokeslam. In the below video, you can see how The Undertaker escaped death from poorly executed jackhammer by Goldberg. WWE Raw June 22, 2020 Results and Highlights: Dolph Ziggler Challenges Drew McIntyre For Title Match; Big Show Confronts Randy Orton & Ric Flair (View Pics)

The Undertaker has retired from WWE after fighting his last match against AJ Styles at WrestleMania 36. WWE has also confirmed the news on its Twitter handle. Speaking about Goldberg, he was last seen in action against Braun Strowman at WrestleMania 36, where he was unsuccessful in defending his WWE Universal title.

(The above story first appeared on LatestLY on Jun 23, 2020 09:16 PM IST. For more news and updates on politics, world, sports, entertainment and lifestyle, log on to our website latestly.com).