Despite most industry experts placing their bet on iPhone 12, JP Morgan has said that iPhone 12 Pro continues to experience "robust demand". Earlier reports mentioned that Apple reported weaker than expected iPhone sales due to the delayed iPhone 12 launch. 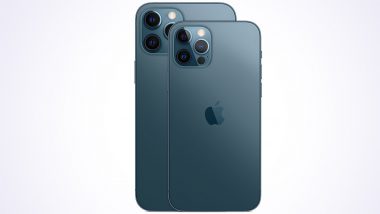 Now, JP Morgan analyst Samik Chatterjee has said that iPhone 12 series lead times have "moderated significantly" since the holidays with most models available for consumers within a week.

"However, even as iPhone 12 Pro lead times have moderated on the same lines as other SKUs, aggregate lead times for 12 Pro still remains quite robust and above 20 days, implying continued robust demand," Chatterjee said.

Wedbush analyst Daniel Ives has also said that the strong sales of AirPods for the holidays provides "another product tailwind" for Apple heading into the new year. Apple shares were up 82 per cent this week, largely driven by optimism about the 5G iPhones. Although Apple's October-November 2020 global sell-through was down YoY, it declined by only low-single digits.

That is positive considering the four to six-week launch delay of the iPhone 12 versus the iPhone 11, according to Counterpoint Research. There was the possibility of a December sales surge, driven by the new iPhone 12, which would bring the quarter's sell-through number into record territory, according to Counterpoint. The popularity of the new model is evident when comparing iPhone 12 and iPhone 11 post-launch sales in the US market on a YoY, week-for-week basis.

(The above story first appeared on LatestLY on Jan 01, 2021 02:41 PM IST. For more news and updates on politics, world, sports, entertainment and lifestyle, log on to our website latestly.com).