The cumulative global sales of Apple iPhone 12 series has crossed the 100-million units mark in April, says a new report. With the iPhone 12 series, Apple has achieved another volume super-cycle after six generations of iPhones and at the cusp of 5G transition, 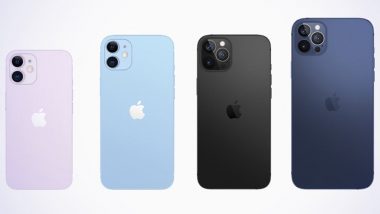 New Delhi: The cumulative global sales of Apple iPhone 12 series has crossed the 100-million units mark in April, says a new report. According to Counterpoint Research's mobile handset Market Pulse Service, the series was able to achieve this feat in the seventh month after its launch, which is two months earlier than the iPhone 11 series. Apple Launches New International Collection Bands for Its Smartwatch.

With the iPhone 12 series, Apple has achieved another volume super-cycle after six generations of iPhones and at the cusp of 5G transition, the market research firm said in a statement on Wednesday. The report said that for the iPhone 12 series, the addition of 5G capability and a full OLED screen attracted customers.

This is also one of the reasons for the iPhone 12 series grossing 22 per cent more revenue than the iPhone 11 series in the first seven months of its launch. The launch price of the base variants of the iPhone 11 Pro Max and the iPhone 12 Pro Max was the same at $1,099.

The notable upgrades in the 12 Pro Max were 5G capability, a higher RAM/memory and the A14 Bionic chip. There was also a trade-off as the charger and headphones were missing from the box. However, this did not seem to be a deal-breaker for consumers, especially in the US, which contributed to 40 per cent of the global iPhone 12 Pro Max sales till April.

The upgrades, which came at the same price as that of the iPhone 11 Pro Max, supported by aggressive operator promotions, helped the 12 Pro Max sales soar to make it the highest-selling device in the US consistently since December 2020. Moreover, the iPhone 12 series was also comparatively less affected by the pandemic than the iPhone 11 series. Also, consumers who held on to their devices last year due to the pandemic, upgraded to the 12 series.

(The above story first appeared on LatestLY on Jul 01, 2021 01:19 PM IST. For more news and updates on politics, world, sports, entertainment and lifestyle, log on to our website latestly.com).