Yiming said that he lacks some of the skills that make an ideal manager. In an internal letter he also that said he will transition to a new role at the end of 2021, focusing on long-term strategy, corporate culture, and social responsibility. 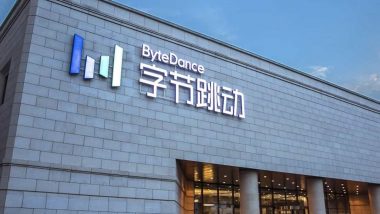 New Delhi, May 20: ByteDance's founder Zhang Yiming has announced that he will step down as the chief executive officer (CEO) and will hand over the reins to co-founder and HR head Liang Rubo.

In an internal letter on Wednesday, Yiming said he will transition to a new role at the end of 2021, focusing on long-term strategy, corporate culture, and social responsibility. 'After several months of thinking about this, I came to the conclusion that transitioning out of the role of CEO, with all of the related day-to-day responsibilities, would enable me to have a greater impact on longer-term initiatives,' Yiming said in the letter. Twitter Users Can Now Check Fleets While Scrolling Tweets on Their Timeline.

'Our success over the last nine years has been predicated upon our ability to innovate at just the right moment in the development of the industry. Notably, this has included applying machine learning to mobile and video products,' he added. He also said that he lacks some of the skills that make an ideal manager. 'I am more interested in analyzing organizational and market principles and leveraging these theories to further reduce management work, rather than actually managing people,' the founder said. Signal Reveals How WhatsApp, Facebook & Instagram Collect User Data for Ads: Report.

Recently, Nikhil Gandhi, the India Head of ByteDance-owned short video-sharing platform TikTok, decided to quit and was currently serving his notice period. After the company folded its India business, Gandhi was redesignated as TikTok Head for the Middle East, Africa, Turkey, and South Asia. TikTok roped in Gandhi in the year 2019 as its India head to drive the next phase of growth for the Chinese short video-sharing platform.

However, in 2020, the Indian government said it was banning 59 apps developed by Chinese firms, including TikTok, over concerns that these apps were engaging in activities that threatened the national security and defense of the country.

(The above story first appeared on LatestLY on May 20, 2021 05:25 PM IST. For more news and updates on politics, world, sports, entertainment and lifestyle, log on to our website latestly.com).