Encrypted messaging app Signal has challenged the user privacy policies of Facebook and Instagram by sharing a series of ads on Instagram to showcase how the social network collects information from users and displays ads basis of those private details. 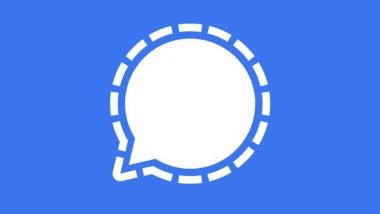 New Delhi: Encrypted messaging app Signal has challenged the user privacy policies of Facebook and Instagram by sharing a series of ads on Instagram to showcase how the social network collects information from users and displays ads basis of those private details. The company claimed that companies like Facebook aren't building technology for you but for your data. Facebook, that blocked Signal from its platforms, was yet to comment on the Signal blog post. WhatsApp Row in India: Signal, Telegram Grab 40 Lakh New Users After WhatsApp Starts Sending Notification for Accepting New Privacy Policy.

"They collect everything they can from FB, Instagram, and WhatsApp in order to sell visibility into people and their lives," Signal said in a blog post late on Tuesday.

One of the ads Signal posted on Instagram, read: "You got this ad because you're a newlywed pilates instructor and you're cartoon crazy. This ad used your location to see you're in La Jolla. You're into parenting blogs and thinking about LGBTQ adoption".

To reveal how this targeting ad game is being performed, Signal said it created a multi-variant targeted ad designed to "show you the personal data that Facebook collects about you and sells access to".

"The ad would simply display some of the information collected about the viewer which the advertising platform uses. Facebook was not into that idea," the company noted. "Being transparent about how ads use people's data is apparently enough to get banned; in Facebook's world, the only acceptable usage is to hide what you're doing from your audience".

"It's already possible to catch fragments of these truths in the ads you're shown; they are glimmers that reflect the world of a surveilling stranger who knows you. We wanted to use those same tools to directly highlight how most technology works. We wanted to buy some Instagram ads," it added.

Facebook immediately blocked Signal's advertising account after it aimed to run an ad campaign to show Instagram users how Facebook collects their. Signal said that Facebook is more than willing to sell visibility into people's lives, unless it's to tell people about how their data is being used. Facebook's own tools have the potential to divulge what is otherwise unseen, Signal alleged. Both Signal and Telegram saw a significant uptake in new users as Facebook-owned WhatsApp's new Terms of Service and Privacy Policy triggered a fresh privacy debate.

(The above story first appeared on LatestLY on May 05, 2021 11:47 AM IST. For more news and updates on politics, world, sports, entertainment and lifestyle, log on to our website latestly.com).