"Elon Musk, a word of advice: Don't measure strength against that of Putin's," wrote Kadyrov. "Vladimir Vladimirovich (Putin's middle name) will look unsportsmanlike when he beats the hell out of you, a much weaker opponent. 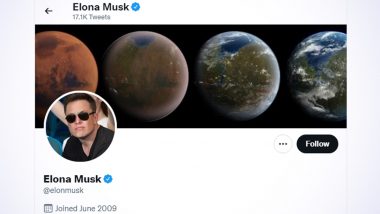 San Francisco, March 16: Tesla CEO Elon Musk has changed his name on Twitter to "Elona Muska after his challenge to fight Russian president Vladimir Putin grabbed the attention of Ramzan Kadyrov, the leader of the Chechen Republic.

In a statement on Telegram, which was shared by the Tesla and Space X chief executive, the Chechen leader cautioned him against seeking out a challenge with the Russian president, reports The Independent.

"Elon Musk, a word of advice: Don't measure strength against that of Putin's," wrote Kadyrov. "Vladimir Vladimirovich (Putin's middle name) will look unsportsmanlike when he beats the hell out of you, a much weaker opponent. Elon Musk and Grimes Secretly Welcome Second Child, A Baby Girl Named ‘Exa Dark Sideræl Musk’.

Therefore you will need to pump up those muscles in order to change from the gentle (effeminate) Elona into the brutal Elon you need to be. I propose training at one of several centres in the Chechen Republic," Kadyrov added.

"You will return from the Chechen Republic a completely different person Elona, that is, Elon," he said. "Thank you for the offer, but such excellent training would give me too much of an advantage," Musk, in response, wrote on Twitter.

"If he is afraid to fight, I will agree to use only my left hand and I am not even left-handed," Musk added and signed off the message as "Elona". On Monday, Musk had challenged the Russian president to a "single combat" fight over his invasion of Ukraine. Elon Musk Challenges Vladimir Putin to a ‘Single Combat’ Fight for Ukraine.

He had tagged the official Kremlin Twitter account in one of the posts, asking in Russian whether it would "agree to this fight". He is yet to receive any official response from the Russian government.

Musk has condemned Russia's invasion of Ukraine, both on his Twitter feed and through his companies. He has also mocked Russian officials on social media, as well as providing Starlink space internet equipment to Ukraine.

(The above story first appeared on LatestLY on Mar 16, 2022 05:20 PM IST. For more news and updates on politics, world, sports, entertainment and lifestyle, log on to our website latestly.com).