Elyments App Launched by Vice President Venkaiah Naidu; Here Are key Features And How to Download 'Made in India' Mobile App 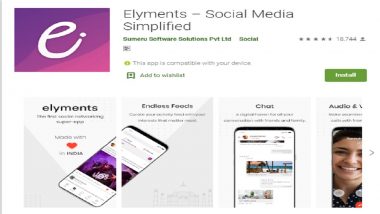 The app was launched days after India banned 59 Chinese Apps. The app has been built by over a thousand IT professionals. These IT professionals were also volunteers of Art Of Living. On the Google Play store, the app mostly received positive reviews. According to reports, the app has been downloaded by over one lakh people so far. The app is entirely “Made in India”. It is listed on Google Play store as Sumeru Software Solutions. Reliance Jio Launches 'JioMeet' HD Video Conferencing App with up to 100 Participants, How to Download & Use JioMeet.

Here are Some Of The Key Features Of The App:

Android users can download the app from Google Play Store Apple App Store. In the search bar, type Elements and then tap on Install button. Similarly, Apple users can also get the app from Apple App store. App’s interface is similarly to Facebook and Instagram. Mobile users can register with their mobile phone and email ID for using Elyments.

During the launch, The Vice-President said such initiatives by the Indian tech industry and professionals were praiseworthy as they not only demonstrated India's prowess in technology but also was a step towards Atmanirbhar Bharat. "I hope this app would prove to be a good desi alternative to the many foreign apps being used by the people", Naidu said and stressed the need to make India leading power in every field, be it science and technology, economy, defence or human development.

(The above story first appeared on LatestLY on Jul 06, 2020 12:21 AM IST. For more news and updates on politics, world, sports, entertainment and lifestyle, log on to our website latestly.com).