Facebook and WhatsApp will no longer consider requests for information on users from the Hong Kong government. 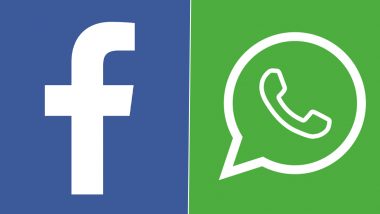 Washington, July 6: Facebook and WhatsApp will no longer consider requests for information on users from the Hong Kong government. The development came days after China imposed the controversial National Security Law in Hong Kong. Facebook, which also owns instant messaging service platform WhatsApp, said the suspension will remain enforced "pending further assessment" of a new national security law imposed on Hong Kong by China. China's National Security Law in Hong Kong: What Has Changed And Why The Legislation Has Led to More Protests?

In a statement, a Facebook spokesperson said the assessment will include "formal human rights due diligence and consultations with human rights experts". "We believe freedom of expression is a fundamental human right and support the right of people to express themselves without fear for their safety or other repercussions," the spokesman added. Digital rights group ProPrivacy called Facebook’s move "a win for both digital privacy and human rights in the region". Hong Kong Police Make First Arrests Under National Security Law Imposed by China.

"With the stakes so high, and the punishments so severe, it is great news to see big tech companies like WhatsApp pushing back in favour of democracy and freedom of expression,” the group said, as reported by Hong Kong Free Press. Critics say China's National Security Law is aimed at suppressing pro-democracy voices in Hong Kong.

What is China's National Security Law in Hong Kong?

The National Security Law gives China unprecedented powers it has never had before. The controversial legislation has six chapters consisting of 66 articles. It deals with four categories of offences – secession, subversion, terrorism, and collusion with a foreign country or external elements to endanger national security. The maximum penalty for each crime is life imprisonment, although, in some minor offences, the suggested punishment is less than three years' imprisonment.

(The above story first appeared on LatestLY on Jul 06, 2020 07:33 PM IST. For more news and updates on politics, world, sports, entertainment and lifestyle, log on to our website latestly.com).