Google will be launching the new generation of Pixel devices - Pixel 4, Pixel 4XL later this year approximately around October 2019. 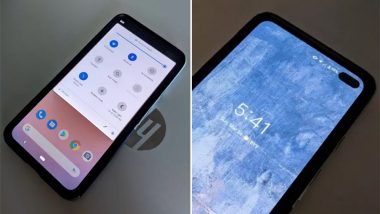 After launching affordable Pixel 3a devices, Google will be launching the new generation of Pixel devices later this year. If the market reports are to be believed, the American tech giant might launch the new Pixel 4 smartphones round October this year. Though there's a lot of time in the arrival, but the rumour mill has already pouring some leaked images about the new iteration from Google. Now, a new set of pictures have surfaced on the internet that are claimed to be live images of Pixel 4XL. The leaked images reveal the pill-shaped punch hole design of the display. Google Pixel 3a, Pixel 3a XL Owners Report Random Shutdowns.

It is important to note that the latest set of pictures of Pixel 4XL are different from the 5K renders that were previously shared by OnLeaks via Twitter. The main difference between the two is the positioning ni of the earpiece. If we consider these images, all the four bezels seem to be of the similar size. We have seen pill-shaped punch hole display previously on Samsung's Galaxy S10+.

As per the report from OnLeaks, the upcoming Pixel 4XL is likely to feature a large squarish camera similar to the one, we have seen in leaked images of iPhone XI. This piece of information is confirmed by YouTuber Lewis Hilsenteger in a video on its YouTube channel - Unbox Therapy.

Another leak comes from the concept art creator - Antoine Collignon, as he has created Google Pixel 4 based on the available leaks and rumours. He displayed a device featuring almost bezel-less design along with a triple cameras at the back in a squarish module. As there's a lot of time in the arrival of new Pixel smartphones, it is advised that the readers should take this information with a pinch of salt.

(The above story first appeared on LatestLY on Jun 12, 2019 07:20 PM IST. For more news and updates on politics, world, sports, entertainment and lifestyle, log on to our website latestly.com).