Apple iPadOS 15 Comes With a Host of Features; Here Are Top 5 Useful Features That Users Can Explore

As Apple iPadOS 15 is gaining almost all of the new features that were introduced in iOS 15, there are also several updates that Apple introduced that are designed exclusively for the larger screen of the iPad or have been adopted from iOS 14. 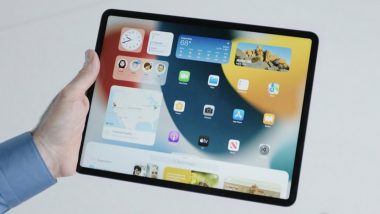 San Francisco, June 13: As Apple iPadOS 15 is gaining almost all of the new features that were introduced in iOS 15, there are also several updates that Apple introduced that are designed exclusively for the larger screen of the iPad or have been adopted from iOS 14.

Widgets can now be placed anywhere on the iPad's Home Screen, and technically this doesn't count as an iPadOS feature because it's something that Apple is bringing over from iOS, reports MacRumors.  Adobe Removing Photoshop Mix, Fix From App Store; Asks Users to Switch to Photoshop Express Photo Editor

In iPadOS 14, users could have a set spot for your widgets, but with iPadOS 15, one can put them anywhere, just like you can on the iPhone.

App Library is another new feature that was introduced on the iPhone first and it's a useful change that lets you see and manage all of the apps you have installed on your iPad in one spot.

Multitasking is an iPad exclusive and it's been improved in iPadOS 15.

Also new to the iPad is a "Quick Note" option for the Notes app. With a swipe of the Apple Pencil, you can open up a Quick Note no matter which app you're in to jot down notes.

You can also create a Quick Note from Control Center or with a keyboard shortcut.

Apple introduced Safari updates across iOS 15, iPadOS 15 and macOS Monterey so this isn't an iPad-only feature, but Safari has a streamlined tab bar and support for Tab Groups so you can better organize your tabs.

Web extensions are supported in iPadOS, there's a new customisable start page and you can refresh a webpage by pulling it down from the top.

Safari also now prevents trackers from accessing your IP address, and if you have a paid iCloud account, a Private Relay feature will encrypt all of your browsing activity.

(The above story first appeared on LatestLY on Jun 13, 2021 07:57 PM IST. For more news and updates on politics, world, sports, entertainment and lifestyle, log on to our website latestly.com).