Nokia G21 Likely To Debut in India Next Month: Report 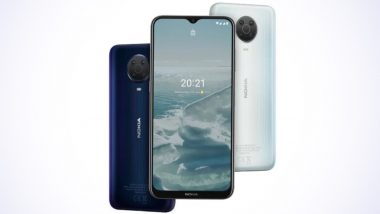 Nokia India is said to launch the G21 smartphone in the country soon. In July 2021, the company had introduced the G20 device, and now, it is planning to launch the G21 phone. According to a report from 91Mobiles, Nokia G21 will debut in India next month. Nokia XR20 Rugged Smartphone Launched in India; Check Prices & Features.

Ahead of its launch, tipster Mukul Sharma has leaked some of its key specifications. Nokia G21 is likely to get a 6.5-inch HD+ display with a resolution of 1600x720 pixels. It is speculated to be powered by an octa-core processor coupled with up to 4GB of RAM and 128GB of internal storage.

For photography, Nokia G21 might feature a 50MP primary lens, a 2MP secondary shooter and a 2MP lens. At the front, there could be an 8MP snapper for selfies and video calls. Connectivity options might include a USB Type-C port, GPS/AGPS/GLONASS/Beidou, Bluetooth, NFC, 4G LTE and Wi-Fi. Apart from this, nothing more is known. We expect the company to release a few teasers before its launch.

(The above story first appeared on LatestLY on Jan 19, 2022 04:46 PM IST. For more news and updates on politics, world, sports, entertainment and lifestyle, log on to our website latestly.com).