The Chinese smartphone maker is expected to launch a new variant of the Realme C15 phone which will be powered by a Qualcomm chipset, which could be a Snapdragon 460 SoC. As a reminder, the Realme C15 is already available in the market with a MediaTek chipset. 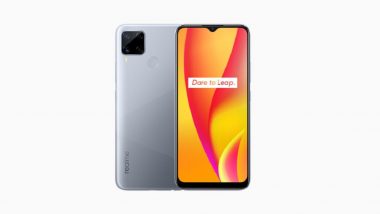 If the market reports are to be believed, the soon-to-be-launched C15 might come with 3GB and 4GB of RAM. There will be two storage options offered on the phone, reportedly 32GB and 64GB. The handset might also come in two new colour options - Power Blue and Power Silver.

The smartphone already available with MediaTek chipset is priced in India at Rs 9,999 which sports 3GB of RAM and 32GB of internal storage. There's also a 4GB variant with 64GB storage that retails at Rs 10,999. It features a 6.5-inch HD+ display with a screen-to-body ratio of 88.7 percent and 20:9 aspect ratio.

It comes equipped with quad cameras at the rear, which comprises of a 12MP primary camera, a black and white portrait lens, an 8MP ultra-wide shooter, and a retro lens. It is powered by an octa-core MediaTek Helio G35 chipset. It comes backed by a 6,000mAh battery supporting18W fast charging.

(The above story first appeared on LatestLY on Oct 25, 2020 11:49 PM IST. For more news and updates on politics, world, sports, entertainment and lifestyle, log on to our website latestly.com).