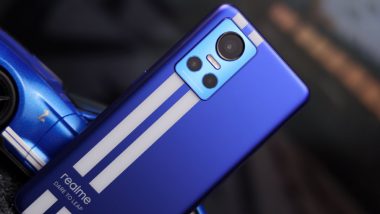 Realme GT Neo 3 smartphone will go official in the Indian market tomorrow at 12 pm IST. It will be a gaming-oriented device from the Chinese brand that is likely to be priced somewhere around Rs 25,000. However, the official prices of the phone will be announced during the launch event. It's worth noting that the GT Neo 3 was launched in the home market last month. Realme Narzo 50A Prime With 50MP Triple Rear Cameras Launched in India.

The Realme GT Neo 3 is likely to come in three configurations - 8GB + 128GB, 8GB + 256GB, and 12GB + 256GB. The gaming phone could come in three colours - Sprint White, Asphalt Black, and Nitro Blue. Do note, that Realme offers GT Neo 3 in two models based on the battery capacities and charging speeds. And, the Indian market is expected to get both models in India.

As far as specs are concerned, the phone will sport a 6.7-inch 2K display with a refresh rate of 120Hz. Under the hood, it will get a MediaTek Dimensity 8100 5G chipset paired with up to 12GB of RAM and up to 256GB of onboard storage. The phone will run on Android 12 with Realme UI 3.0 on top.

In the camera department, the Realme GT Neo 3 is expected to have a triple rear camera module. It could comprise a 50MP Sony IMX766 primary sensor with OIS and EIS. There's also an ultra-wide-angle lens with a 119-degree field of view and a macro shooter. Realme offers the phone in two battery options - 4,500mAh with 150W UltraDart Charging support and a 5,000mAh with 80W fast charging support.

(The above story first appeared on LatestLY on Apr 28, 2022 11:16 PM IST. For more news and updates on politics, world, sports, entertainment and lifestyle, log on to our website latestly.com).