The leak doesn't reveal many details about the upcoming handset. However, it does claim that the phone will be powered by an octa-core Qualcomm Snapdragon 768 SoC with 5G support. 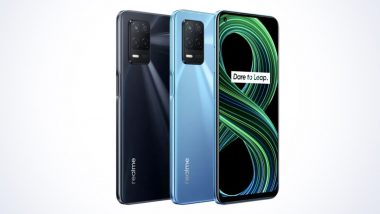 The Chinese phone maker Realme reportedly will launch a smartphone under its V series. According to a leakster, the upcoming phone could be called V25, which has emerged on a Chinese certification website with model number - RMX3143. The leak doesn't reveal many details about the upcoming handset. However, it does claim that the phone will be powered by an octa-core Qualcomm Snapdragon 768 SoC with 5G support. The tipster also mentioned that this device supposedly could be the OPPO K9 5G with fresh colours. Realme C11 2021 With 5,000mAh Battery Launched; Check Prices, Features & Specifications Here.

If the market speculations are to be believed, the new phone could be a spin-off version of the Oppo K9, and the chances are petty much high. It is important to note that all handsets under the V series come with a MediaTek chipset. So, it is speculated that the Realme V25 could follow on the same line, and get a MediaTek processor instead of Qualcomm.

Not much is known about the specifications of the Realme V25. It could sport a 6.4-inch FHD+ AMOLED panel with an under-display fingerprint sensor. The screen is likely to get a refresh rate of 90Hz. For photos and videos, there could be a triple rear camera module packed with a 64MP primary sensor. The other two sensors could be an 8MP ultra-wide-angle lens, and a 2MP macro or a depth sensor. Realme X7 Max, Realme TV India Launch Event Postponed Due To COVID-19.

At the front, the could be a 32MP camera for selfies and video calls. The handset might come in multiple variants, with RAM going up to 12GB of RAM along with internal storage of up to 256GB. The phone is expected to be fuelled by a 4,200mAh battery.

(The above story first appeared on LatestLY on May 09, 2021 11:20 PM IST. For more news and updates on politics, world, sports, entertainment and lifestyle, log on to our website latestly.com).