Blood Moon in July 2018 Will be The Longest Lunar Eclipse in This Century, Know Date and Time and Where to Watch

The 'blood moon,' will also be the longest lunar eclipse in the 21st century. 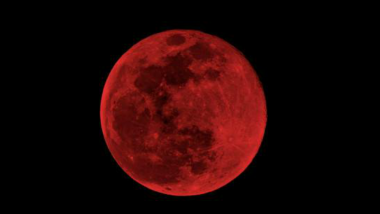 The moon in its total red shade. (Photo credits: Twitter/AnawimHayley )

The month of July will be very exciting for astronomy enthusiasts and stargazers. Towards the end of the month, there will be 'blood moon,' and also the longest lunar eclipse in the 21st century. The blood moon phenomenon occurs when sunlight gets scattered throughout the Earth’s atmosphere. So those who will look at the night sky will witness the spectacular event which will go on for nearly two hours. This phenomenon leaves behind the Super Blue Blood Moon which occurred in January this year.

Date and Time of Lunar Eclipse in July

The entire eclipse and the blood moon occurrence will be in the night July 27-28 will be for 1 hour, 43 minutes. The eclipse will reach its peak at 8:22 p.m. UTC, that is 1:52 am (IST-Indian Standard Time). It is 4:22 p.m in EDT or Eastern Daylight Time. People living in Australia, Asia, Africa, Europe, and South America will experience the visual delight. Lunar Eclipse 2018 in India: July 27 Chandra Grahan Sutak Time, Significance & Myths Around Blood Moon.

Talking of the areas in which the eclipse can be seen Bruce McClure informed, "This lunar eclipse is primarily visible from the world’s Eastern Hemisphere – Europe, Africa, Asia, Australia and New Zealand. South America, at least in part, can watch the final stages of the eclipse just after sunset July 27, whereas New Zealand will catch the beginning stages of the eclipse before sunrise July 28. North America, most of the Arctic and much of the Pacific Ocean will miss out entirely." 'Alien Spotted' in Video Showing Super Blue Blood Moon, Claims UFO-Hunting Group

What is the blood moon?

A blood moon is when Earth's moon is in full eclipse. At other times the moon is whiteish but during the eclipse, it turns to a little shade of red. This is because while the moon orbits around the Earth, the Earth rotates around the Sun. In the course of these rotations, the sun happens to illuminate the surface of the moon, when it reaches the full moon state.

The lunar eclipse, the moon will remain in the Earth's shadow for nearly 103 minutes. Astronomer Bruce McClure has said, "A partial eclipse precedes and follows the century’s longest total lunar eclipse, each time lasting one hour and six minutes. So, from start to finish, the moon takes nearly four hours to cross the Earth’s dark umbral shadow." Are you excited to witness the longest eclipse of the century?

(The above story first appeared on LatestLY on Jun 25, 2018 09:45 AM IST. For more news and updates on politics, world, sports, entertainment and lifestyle, log on to our website latestly.com).