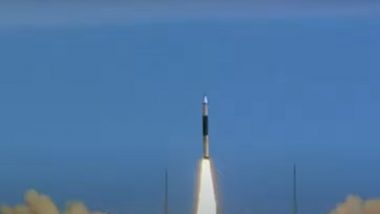 Beijing, July 10: Kuaizhou-11 (KZ-11), a new Chinese solid-fueled carrier rocket failed in its first launch, reports said on Friday. The failure in Kuaizhou-11 rocket's first launch caused a loss of two satellites that it was carrying. The Kuaizhou-11 lifted off at 12:17 am EST from a transporter erector launcher at the Jiuquan Satellite Launch Center in northwest China. According to news agency Xinhua, a malfunction resulted in the failure. Major Doomsday Averted? Huge Asteroid 2020 LD, The Size of Taj Mahal, Flew Close to The Earth And Scientists Realised Two Days Later!.

Video footage showed Kuaizhou-11 rocket performing well for at least one minute during its maiden flight. However, it failed to reach its intended orbit. Kuaizhou is a low-cost solid-fueled carrier rocket, operated by Expace, a commercial spin-off from the China Aerospace Science and Industry Corp. The specific cause of the failure is under further analysis and investigation, Xinhua reported. The rocket was carrying two satellites - Jilin-1 video satellite and CentiSpace-1-S2 (Weili-1-02). Rare Comet NEOWISE Shines Brightly Up Above! See Dazzling Pictures of C/2020 F3 Captured From International Space Station.

Jilin-1 video satellite is developed by Changguang Satellite Co. Ltd., for Bilibili, which is a Chinese video-sharing website. CentiSpace-1-S2 (Weili-1-02) is developed for Beijing Future Navigation Technology Co., Ltd. The mission was China’s 19th launch of 2020, but it turned out to be the third failure for Beijing this year.

(The above story first appeared on LatestLY on Jul 10, 2020 04:51 PM IST. For more news and updates on politics, world, sports, entertainment and lifestyle, log on to our website latestly.com).