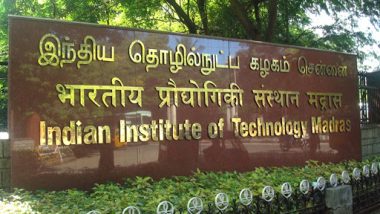 New Delhi, June 27: Researchers at the Indian Institute of Technology (IIT) Madras have developed algorithms for drones to help study how fire behaves in space stations, shuttles and satellites. According to the team, a multirotor microgravity platform can also simulate reduced-gravity environments similar to Moon and Mars, thereby recreating those conditions on Earth for experiments.

The team claims that at present, generating microgravity (gravity experienced is close to zero) is possible only through space stations, satellites, space shuttles, sounding rockets, and drop towers, almost all of which are beyond the reach of most educational institutions in India.

"These algorithms and techniques for multirotor UAV control could accurately maintain its acceleration. Although multirotor UAVs currently do not have high payload capacities, they are readily available at a low cost, making them accessible to all. We have conducted flight tests using a quadrotor and a hexrotor that we developed and found that those flights attained stable and high-quality microgravity levels," he said.

The two multirotors that the team built and flew are the first UAVs to conduct on board experiments in microgravity. Earlier, efforts by other researchers to make UAVs as microgravity platforms did not see much success as those platforms could not attain gravity levels close to zero.

"All it takes is a change in one parameter in the software that Siddhardha embeds in his multirotor that autonomously performs the manoeuvres required to achieve the level of gravity needed," said Joel George Manathara, Assistant Professor, Department of Aerospace Engineering, IIT Madras. NASA’s Ingenuity Helicopter Completes 8th Flight on Mars.

The team has carried out experiments on board his multirotor microgravity platforms to observe capillary action as well as the change in the shape of the liquid meniscus in microgravity.

"These experiments undoubtedly prove that multirotors can be turned into platforms on which microgravity experiments can be carried out. Nowadays, almost every educational institution has a robotics lab or a flying club with multirotors. Thus, this research opens up the possibility of conducting experiments in microgravity at every university in India," Siddhardha said.