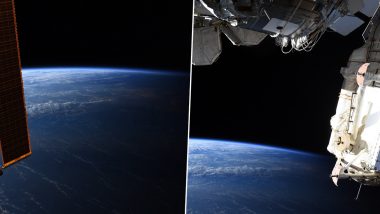 Have you ever looked at the pictures and videos online that show how beautiful our Earth looks like from the space? There are so many videos of NASA which show how the blue planet looks from the International Space Station. Now, in recent pictures, we have got a sight of the boundary between day and night on the planet. NASA astronaut Robert L Behnken who recently went to the ISS aboard the SpaceX Falcon 9 rocket has shared pictures of the earth's day and night boundary. It's lovely to see a part of the planet appearing dark while the other side has a light and shines blue. How Does Earth Look From The Space? These Live Streaming and Time Lapse Videos From ISS Will Leave You Spellbound.

Robert Behnken nicknamed Bob showed a glimpse to everyone through his Twitter on how the planet looks when it is night and day, a boundary of the phase. He wrote, "My favorite views of our planet that capture the boundary between night and day," and we do not blame his mention of favourite. he shared two photos which show the two parts, one in darkness, other has light. How do Astronauts Pee and Poop in Space? NASA Astronaut Reveals The Misery of Spaceship Toilets.

My favorite views of our planet that capture the boundary between night and day. pic.twitter.com/Jo3tYH8s9E

The pics have gone viral with close to 60,000 likes and over 8,500 retweets. People were definitely impressed with the beauty in these pictures. Check some of the reactions:

Wow is so beautiful

So Peaceful From Up Above

Although there is a #pandemic down there, what a beautiful picture!

I know right. What a spectacular transition! Let's say from night to a day!😎🌞

Some questioned where are the stars and why can't they be seen in the pictures. But the answer to that it, stars are much further away in the deep space and not close to the ISS. But anyway, the point being earth looks so stunning as always from outer space. We are sure, some people wouldn't mind staying in space for a few days giving the situation on the planet right now.

(The above story first appeared on LatestLY on Jul 01, 2020 03:10 PM IST. For more news and updates on politics, world, sports, entertainment and lifestyle, log on to our website latestly.com).