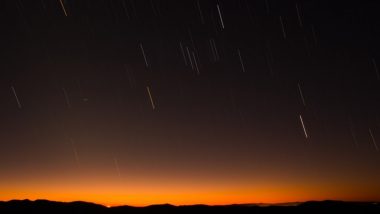 Hello sky lovers out there, make way for Perseid meteor shower! The brightest meteor showers of the year are here and will also grace the skies in India too. While a half-moon and monsoon may block the view in many parts of India, the celestial event will still be visible in other regions. Ahead of meteor shower 2020, people have taken to the internet with quite some queries about the event. Some of the questions include ‘What Causes Meteor Showers?’ to ‘What Time to See Perseids Today Live?’. So, here we bring to Perseid meteor shower 2020 Frequently Asked Questions (FAQs) and answers to it. Perseid Meteor Shower 2020 to Light Up the Night Sky on August 11 in India: How to Watch Year’s Brightest Shooting Stars? Here’s Everything to Know About the Celestial Event.

The meteor shower has been active from July 14 and will last till August 24. But it will most likely peak on August 11 and 12. If the weather does not play the spoilsport, then it will be the best time to try to view it. NASA says this year the moon will remain above the horizon during prime viewing hours, making it hard to get an optimal view. Meteor showers are unpredictable, but on a clear night, if everything falls in place, then you can expect to see meteor shower anywhere from 15 to 20 meteors per hour. List of Full Moon in 2020 Calendar: From June 5 Strawberry Moon to July 5 Thunder Moon to December 30 Cold Moon, Here's Complete List With Names and Dates.

Meteors are part of meteoroids often that are remains of comets or space objects composed of dust. When these meteoroids enter the Earth’s atmosphere, they look like shooting stars which are referred to as meteors.

What Causes the Perseid Meteor Shower?

Comet Swift-Tuttle is the largest object which passes by Earth; its nucleus is about 26 kilometres wide. It last passed nearby Earth during its orbit around the sun is 1992, and the next time will be in 2126. But the Earth passes through it and the dust and debris it leaves behind every year create the annual Perseid meteor shower.

Will Meteors Be Visible Tonight?

Yes, the meteors will be visible in the night. However, the visibility will depend on the moon brightness and the presence of monsoon clouds in your region.

What Time is The Perseid Meteor Shower 2020?

Perseid meteor shower will peak on August 11, (Tuesday) but it will be visible throughout Tuesday and Wednesday night. In India, the visibility of meteors will be high in the night from 2:00 am onwards.

Perseid meteor shower is caused by debris left behind the Comet Swift-Tuttle. The meteor count can go down from 60 per hour to 16-20 meteors per hour. Despite the moon's brightness affecting the peak time to watch the stunning celestial show, one meteor which appears like a shooting star can be seen every two minutes.

(The above story first appeared on LatestLY on Aug 11, 2020 10:55 AM IST. For more news and updates on politics, world, sports, entertainment and lifestyle, log on to our website latestly.com).