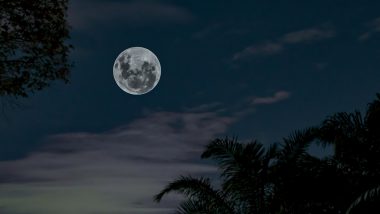 The full moon of June called the Strawberry Moon will appear in the skies on June 6, 2020. The celestial event will coincide with the penumbral lunar eclipse June 2020 which is expected to occur on June 5, 2020. However, as the name suggests, the moon does not look pink in colour. The moon so as it marks the time of the ripening of the fruit during the northern summer. Strawberry Moon will appear in the skies on June 5 at 8.12 pm. The Algonquin tribes considered this time as the right time to harvest ripened berries. It is also the last full moon of the Spring season. Every full moon around the year has different names due to varying seasonal changes during this time. Here is a list of full moon 2020, it includes everything from July Thunder Moon to December Cold Moon. Strawberry Moon 2020 Facts: From Date to Visibility, Know Interesting Trivia About June's Full Moon That Coincides With Penumbral Lunar Eclipse.

The full moon that appears during the beginning of the strawberry picking season is called Strawberry Moon. It's also known as Rose Moon and Hot Moon as it graces the sky during the onset of summer. This year, Strawberry Moon coincides with a penumbral lunar eclipse. Strawberry Moon will appear in the skies on June 5.

The moon is named so due to the prevalence of summer storms. The moon is also known as Full Buck Moon as during this time buck's antlers are fully grown. In 2019, the Thunder Moon not only coincided with a partial lunar eclipse, but also on the 50th anniversary of the Apollo II mission. July's full moon may appear a shade darker than usual, as the third penumbral lunar eclipse of 2020 is set to take place around the same time. July Thunder Moon will appear in the skies on July 5. Strawberry Moon 2020 Date and Time: From The Meaning to Its Formation, Know Everything About Full Moon of June.

The moon is known so as those in North America caught Sturgeon, a type of fish during this time. It is also referred to as Grain Moon as corn and other grains are gathered during the same time. Sturgeon Moon will appear in the skies on August 3. The Perseid meteor shower will also peak around the same time, on August 12 and 13, 2020. The black moon known as the third new moon is a part of four new moons.

The celestial events will occur on  September 2 and October 1. September marks the time of harvest ahead of autumn and as farmers work in the fields till late in the evening, the full moon gives them light. Due to which it is also known as Harvest Moon. Some tribes also call it Full Corn Moon, Barley Moon or Fruit Moon.

October's Hunter's Moon will appear in the skies on October 31. In the past hunters used to hunt during the night in the October full moon's light, hence it got the name Hunter's Moon. This full moon is also known as the Travel Moon and the Dying Grass Moon. In 2020, the Hunter's Moon will also be a blue moon, because it is the second of two full moons to occur in October.

Beaver Moon will grace the skies on November 30. It is called so as beavers build their winter dams around this time. It is also called the Frost Moon as winter frots begin during the time.Ahead of June 5 Full Moon, View Spectacular Strawberry Moon Photos From the Past Celestial Event Captured by Sky Gazers!

As Nights are long and winter becomes colder, it is named so. It's also referred to as Moon before Yule and Long Nights Moon. Cold Moon will appear in the sky on December 30.

Wolf Moon will appear in the skies on January 10. It was named so as packs of wolves howl in hunger around this time. The January moon is also known as the Old Moon, Ice Moon and Snow Moon.

Due to the huge amount of snowing this month, the moon in February is called Snow Moon. It is also referred to as the Hunger Moon. Snow Moon appear on February 9 this year.  Penumbral Lunar Eclipse June 2020: Interesting Facts About the Celestial Event That Coincides With Strawberry Moon.

Worm Moon appeared in the skies on March 9. As temperature rises, earthworm begins to come out in search of food. Traditionally it is also referred to as Sap Moon, Crow Moon and Crust Moon. In Anglo Saxon, it called the Lenten Moon. It takes place in the same month as the Spring Equinox and also the micro new moon.

The full moon in April is also known as Pink Moon. It is due to the pink wildflowers that appear in North America during this time the moon is named so. It is also known as the Egg Moon, due to spring egg-laying season. Some coastal tribes referred to it as Fish Moon because it appeared at the same time as the shad swimming upstream. This full moon has another importance, it helps in finalising the date of Easter which is always the Sunday after the first full moon. In April, Pink Moon appeared on April 8.

The full moon comes around every month and light up the sky at night. During a full moon, the entire face of the moon is illuminated by the Sun's rays. Technically, this Moon phase only lasts a moment, when the Sun and the Moon are aligned on opposite sides of Earth.

(The above story first appeared on LatestLY on Jun 05, 2020 06:31 PM IST. For more news and updates on politics, world, sports, entertainment and lifestyle, log on to our website latestly.com).