Astronomers have discovered an asteroid which is approximately 1 Km wide revolving around our Sun faster than other spacerocks. They have named the asteroid 2021 PH2. 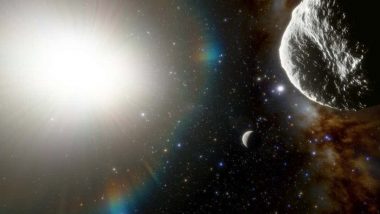 If you are an astrophile and loves reading about space and stars, this one will amaze you! Astronomers have discovered an asteroid that is approximately 1 Km wide revolving around our Sun faster than other space rocks. They have named the asteroid 2021 PH2. This asteroid was initially placed in the main Asteroid Belt between Mars and Jupiter and was pulled closer to the Sun because of the gravitational force of inner planets.

It is learnt that the asteroid completes one orbit around the Sun in just 113 Earth days. It is regarded as the shortest orbital period in our solar system after Mercury which takes only 88 days. The asteroid zooms past the Sun at a distance of around 20 million Km while approaching closer. This distance is estimated to be twice as closer as Mercury. The researchers have also found that the orbit of the asteroid is somewhat unstable and after millions of years from now, this asteroid will collide with Mercury, Venus or the Sun.

Astronomers have discovered an #asteroid that revolves around our Sun faster than all other #spacerocks! Named 2021 PH2, it is approximately 1 km wide.

This asteroid was first discovered by Scott Sheppard of the Carnegie Institution of Science, using the Dark Energy Camera on top of the Víctor M. Blanco Telescope. However, the astronomers are trying to trace the exact location of the asteroid but are unable to decode it. Understanding the high inclination of the orbit, it is assumed that this asteroid could be an extinct comet that has travelled from the outer realms of our solar system.

The astronomers are willing to learn more about the asteroid. However, this will be possible only next month as it is likely to enter the solar conjunction which means it will move behind the Sun.

(The above story first appeared on LatestLY on Aug 25, 2021 06:32 PM IST. For more news and updates on politics, world, sports, entertainment and lifestyle, log on to our website latestly.com).