Ocean Zone Discovered in Bermuda: Territory is Home to over 100 New Species of Marine Life

The team spent hundreds of hours underwater to discover over 100 new species, including tanaids - minute crustaceans - dozens of new algae species and black wire coral that stand up to two metres high. 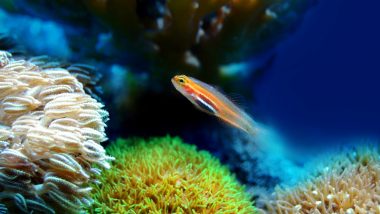 London, May 8: Oxford scientists have discovered an ocean zone off the coast of Bermuda teeming with over 100 species new to science. The Rariphotic Zone (rare light zone) extends from 130 metres to 300 metres and joins five other areas which have distinct biological communities living and growing within them. The section was discovered during a research mission to the British island territory of Bermuda organised by ocean exploration charity Nekton, and led by scientists from Oxford University in the UK.

The team spent hundreds of hours underwater to discover over 100 new species, including tanaids - minute crustaceans - dozens of new algae species and black wire coral that stand up to two metres high. "Considering the Bermudian waters have been comparatively well studied for many decades, we certainly were not expecting such a large number and diversity of new species," said Alex Rogers, professor at Oxford University and scientific director of Nekton. The discovery of a whole new ocean zone, teeming with life, shows that there could be far more ocean species, and of greater variety than previously thought, Rogers told The Telegraph. "The average depth of the ocean is 4,200 metres. If life in the shallower regions of the deep sea is so poorly documented it undermines confidence in our existing understanding of how the patterns of life change with depth," he added.

The group also discovered a major algal forest on the summit of an underwater mountain 24 kilometres off the coast of Bermuda. The undersea mountain's slopes were found to harbour gardens of twisted wire corals and sea fans, communities of sea urchins, green moray eels, yellow hermit crabs, small pink and yellow fish and other mobile fauna. There are over 100,000 underwater mountains in seas across the globe yet less than 50 have been biologically sampled in detail.