A woman claimed that she got pregnant after she had a sexual encounter with a UFO, according to the Pentagon report. 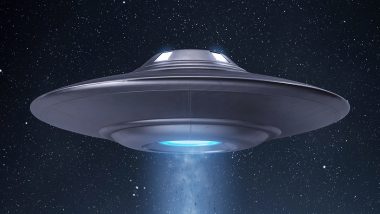 A woman claimed that she got pregnant after she had a sexual encounter with a UFO, according to a Pentagon report.

The report, titled Anomalous Acute And Subacute Field Effects on Human and Biological Tissues, detailed the impact that alleged UFO encounters have had on people's health.

The stunning revelations come after the English daily, The Sun, obtained documents from the U.S.' Defence Intelligence Agency (DIA) as part of a huge Freedom of Information request.

The bizarre claim was among several more outlandish ones that featured in Pentagon report. Others include descriptions of "apparent abduction", “unaccounted for pregnancy” sexual encounters, the experience of telepathy and perceived teleportation, the newspaper reported.   UFO Spotted in Pakistan? Strange 'Bulging Triangle UFO' Looming Over Islamabad For Two Hours in Broad Daylight, Watch Viral Video

Remarkably, the report states that here have five reported sexual encounters between UFOs and humans.  Do UFO and Aliens Exist? Final Report by US Intelligence Does Not Rule Out Possibility of Extraterrestrial Spacecraft, Says Only One of 144 Sightings Can Be Explained

The report added said it had 42 cases from medical files and 300 similar "unpublished" cases where humans had been injured after the bizarre encounters.

The report was part of more than 1,500 pages of Defense Intelligence Agency (DIA) documents for the Pentagon's UFO programme, the Advanced Aviation Threat Identification Program (AATIP).

The Sun said that they requested the documents in December 2017 and they were just handed over with "some portions" withheld.

(The above story first appeared on LatestLY on Apr 07, 2022 05:10 PM IST. For more news and updates on politics, world, sports, entertainment and lifestyle, log on to our website latestly.com).