Scientists Develop Monkey-Pig Chimeras, List of Other Chimeric Animals That Have Been Made For Genetic Experiments 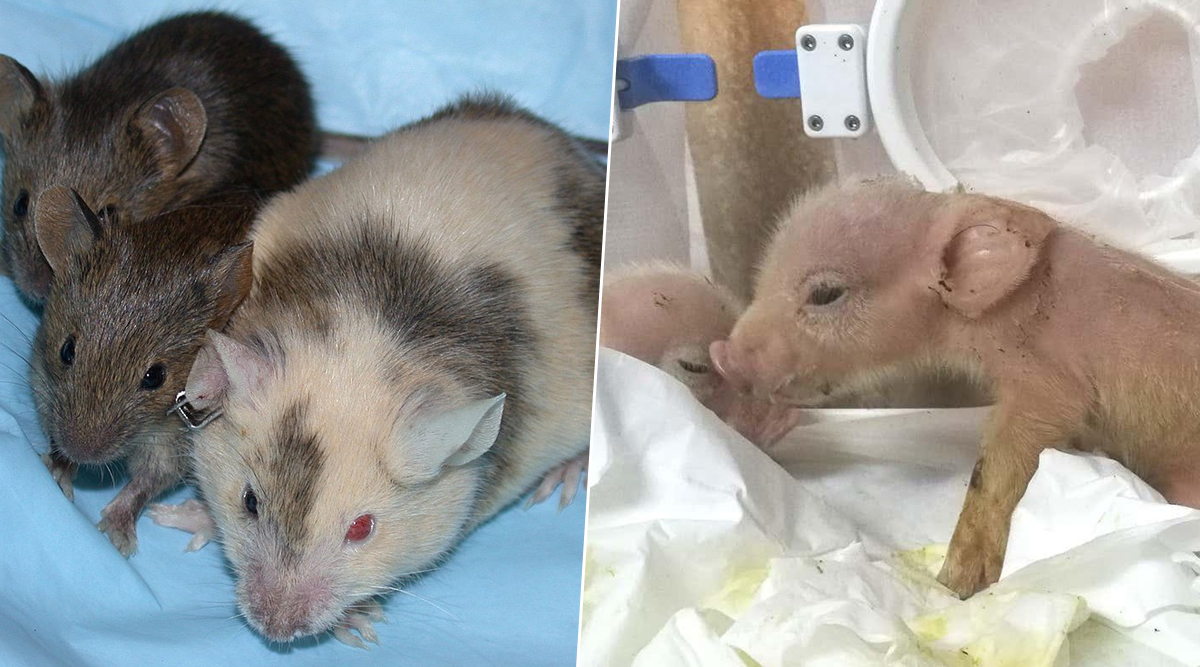 The field of science is vastly expanding and scientists are able to achieve many breakthroughs each passing day. One of the recent achievement of Chinese scientists of monkey-pig hybrid Chimeras is being talked about recently. But this is not the first time scientists have made such hybrid species to study more on human organ development. The making of chimeras is one of the way of growing human organs in other animals and thus study the details of genetics and effects. As scientists study more into this advanced form of research, we look at some of the Chimeras that have been made in the recent years. Pig-Monkey Hybrid Chimeras Made By Scientists in China Dies! What is Chimera? Are There Human Chimeras? Here's Everything You Need To Know.

Chimera is a a single organism composed of cells with distinct genotypes. Chimeric animals are when they are produced by merging multiple fertilized eggs. One of the ways of chimerism in animals is seen by organ transplantation, when one individual tissues that developed from a different genome.

Chinese scientists successfully made the monkey-pig hybrid by using DNA from macaque monkeys in the heart, liver, spleen, lung and skin of the piglets. This monkey-pig chimeras were bred from more than 4,000 embryos with the help of IVF.  The team of scientists from State Key Laboratory of Stem Cell and Reproductive Biology in Beijing genetically modified monkey cells. These cells were then injected in fertilised pig embryos. Later they were made into surgate sows with IVF.

Here's a Pic of Monkey-pig Chimera:

In 2017, scientists from the Salk Institute in California made an experiment to to grow the first embryos containing cells from humans and pigs. However, this process was not as successful as expected. Out of 2,075 implanted embryos, only 186 developed in the time period. This proved like a problem to carry on with the experiment in the long run.

Spanish-born biologist Juan Carlos Izpisúa Belmonte worked with a team of researchers in China and made the first human-monkey Chimeras in August his year. In this case, human cells were added to the modified monkey embryos. This process was done in a hope to grow organs for transplants. This research was carried to pave way for using animals for human organ transplants in the future. But there were a lot of ethical concerns raised after this case, beacuse of which the scientists stopped the process. Japan: Human Organs to Be Grown in Animals for First Time.

Scientists have also made a mouse-rat chimera for biological research. In fact, the first chimeric mouse was made in  the 1960s through the aggregation of eight-cell-stage embryos. In one of not so recent experiments, in 2010, Hiromitsu Nakauchi, a stem cell biologist at the Stanford University School of Medicine used cells to grow a rat pancreas in a mouse. The researchers injected mouse pluripotent stem cells into embryonic rats that had been conceived just a few days earlier. They were genetically modified to lack the ability to grow their own pancreas.

These are some of the chimeric animals that have been made in scientific labs to study more on genetic development. There are a lot of ethical guidelines that need to be followed to carry out such experiments and certain permissions are required before going ahead. So the kind of research is also at the center of many controversies.