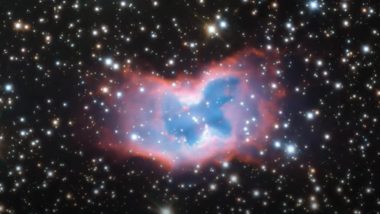 There are so many things in the space; we are yet to discover. Every time, scientists and researchers spend more time studying the astronomical objects, often they come across unusual heavenly bodies they have never seen before. Another such rare mesmerising event has just been captured—a space butterfly. Yes, extremely rare footage came across on the internet recently. The European Southern Observatory’s (ESO)’s Very Large Telescope (VLT) has captured an unusual and striking colourful bubble of gas called ‘NGC 2899,’ which resembles a beautiful butterfly, glowing in the space. The team has shared a video that shows the stunning photo of the bubble of gas with its symmetrical structures, beautiful colours and intricate patterns, floating across the sky. Rare Spectacle of Meteorite Flying Across and Exploding in Sky Captured by Musician Amber Coffman in New Mexico, Leave Netizens Amazed!

While releasing the rare moment in a video, ESO explained that the object has never been imaged in such striking detail, with the faint outer edges of the planetary nebula glowing over the background stars. It further stated that the object, NGC 2899, is located between 3000 and 6500 light-years away in the Southern constellation of Vela, also called The Sails. It has two central stars, which are believed to give its appearance nearly symmetric. NASA Mars 2020 Mission: Perseverance Rover Launched Successfully, 10 Points to Know.

“NGC 2899’s vast swathes of gas extend up to a maximum of two light-years from its centre, glowing brightly in front of the stars of the Milky Way as the gas reaches temperatures upwards of ten thousand degrees. The high temperatures are due to the large amount of radiation from the nebula’s parent star, which causes the hydrogen gas in the nebula to glow in a reddish halo around the oxygen gas, in blue,” explained ESO in its blog.

Watch the Video of Space Butterfly:

Isn’t it gorgeous? This image of the space butterfly was created by the ESO Cosmic Gems programme, an outreach initiative to provide more knowledge in the field of science. We knew that the galaxy is beautiful, but we just get mesmerised every time we come across such stunning objects, glowing in the sky. And thanks to the astronomy researchers, who capture such rare astronomical bodies for the purposes of education and public outreach.

(The above story first appeared on LatestLY on Aug 01, 2020 09:46 AM IST. For more news and updates on politics, world, sports, entertainment and lifestyle, log on to our website latestly.com).