Surya Grahan 2020 Date and Time in India: Know All About Annular Solar Eclipse Which Will Look Like a Ring of Fire

Surya Grahan 2020 will occur on June 21. The annular eclipse will be visible from India, parts of Europe, Africa, Pacific, Asia, Indian Ocean and north of Australia. Reportedly, the celestial event will look like a "ring of fire" during the phenomenon. The solar eclipse of June 21 will start at 9:15 am and end at 3:04 pm in India. 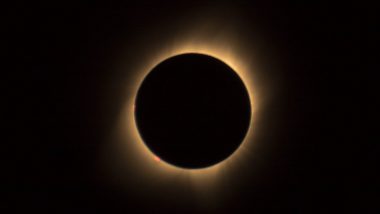 June 21 occurrence is an annular eclipse when the new moon casts a shadow on Earth as it is between the sun and earth. The moon blocks the light of the sun from reaching the Earth that causes Solar Eclipse or Surya Grahan. The moon then casts a shadow onto Earth, wherein the first shadow is known as the umbra and the second shadow is called the penumbra. India to Witness Solar Eclipse on June 21, Skygazers Can Observe ‘Ring of Fire’ During the Phenomenon.

As the moon is far from the Earth, it will look small and won't block the entire view of the sun. On June 21, the annular eclipse will first start in Africa and progress through South Sudan, Ethiopia, Yemen, Oman, Saudi Arabia, the Indian Ocean and Pakistan, before entering India over Rajasthan. It will then move on to Tibet, China, Taiwan, before ending at the middle of the Pacific Ocean. Surya Grahan is expected to be a great sight for skywatchers as the moon will cover the Sun's surface making it look like a 'Ring of fire'.

(The above story first appeared on LatestLY on Jun 16, 2020 04:33 PM IST. For more news and updates on politics, world, sports, entertainment and lifestyle, log on to our website latestly.com).