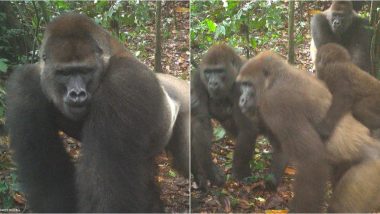 Gorillas and other wildlife populations are being protected in Mbe mountains through joint management and conservation efforts by the Wildlife Conservation Society and the Conservation Association of the Mbe Mountains – an alliance of nine local communities. No Cross River gorillas have been recorded or reported killed in Nigeria since 2012. Gorilla at San Diego Zoo Undergoes Cataract Surgery, Doctors Successfully Perform First Ever Eye Operation on Primate.

Talking about the photos, head chief of one of the surrounding villages, Otu Gabriel Ocha was quoted as saying, "I am very happy to see these wonderful pictures of Cross River gorillas with many babies in our forest. This shows that our conservation efforts in partnership with WCS are yielding fruits. I hope that we can continue these efforts so that we can pass the heritage to future generations."

Cross River Gorillas With Their Babies:

Cross River gorillas, or Gorilla gorilla diehli are found only in an isolated region along the Nigeria-Cameroon border. Ocha added, "Previously, camera traps at WCS sites in Cameroon and Nigeria have captured just a few images, including one from 2012 in Cameroon’s Kagwene Gorilla Sanctuary showing one member of the group missing a hand likely from a snare injury."

(The above story first appeared on LatestLY on Jul 11, 2020 02:24 PM IST. For more news and updates on politics, world, sports, entertainment and lifestyle, log on to our website latestly.com).