The PS5 is launched with a next-generation DualSense Controller which offers immersive haptic feedback, dynamic adaptive triggers & a built-in microphone. 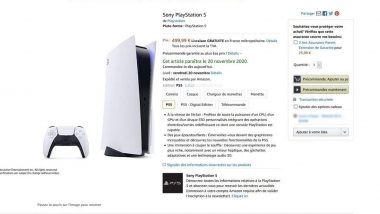 The Japanese gaming company recently launched its Sony PS5 globally but its price & availability were kept in suspense. The Playstation5 has been spotted on Amazon France website that revealed its price & release date. As per a report, a Twitter user managed to capture a screenshot after someone who works at Amazon France listed the PS5 along with the release date & pricing for both models. The price & availability has been inevitably taken down now. Sony PlayStation 5 Gaming Console Revealed Featuring Spider-Man: Miles Morales, Gran Turismo 7, Resident Evil 8 & More.

Sony showcased two models of PlayStation 5 - a regular one with a 4K Blu-Ray drive & a Digital Edition that doesn't include the disk drive. According to the information leaked on Amazon.fr, the Sony PS5 was listed with a price tag of EUR 499 (approximately Rs 42,700) & will be released on November 20. The PS5 Digital Edition was listed for EUR 399 (approximately Rs 34,200). Coming to the specifications, the PS5 console is fancier & sleeker as compared to Microsoft's Xbox Series X.

...and here it is. Thanks for watching! #PS5 pic.twitter.com/pOzHc31X3G

The PS5 features a black core surrounded by curved white edging & a blue glow. The PS5 is launched with a next-generation DualSense Controller which offers immersive haptic feedback, dynamic adaptive triggers & a built-in microphone. Unlike PS4, the PS5 features a 16GB GDDR6 RAM & a solid-state drive. The beautiful PlayStation5 also supports 8K graphics, 4K graphics at 120Hz refresh rate, 3D audio & compatibility with PS4 games. As per the firm, PlayStation5 is all set to be released on Holidays 2020. So the Amazon France listing release date does match with what Sony has stated.

(The above story first appeared on LatestLY on Jun 18, 2020 03:26 PM IST. For more news and updates on politics, world, sports, entertainment and lifestyle, log on to our website latestly.com).